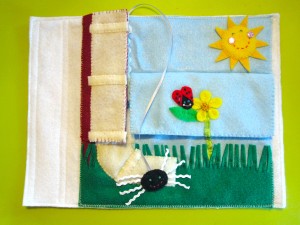 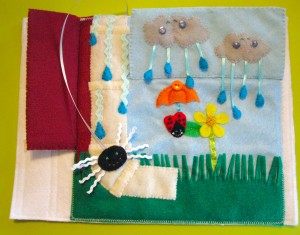 An animated gif would gave been too big for this page, so you’ll have to suffer through my singing! It was a bit tricky holding the camera in my right hand and opening the flaps/moving the spider with my left hand, but I managed!

This page was a request on the Facebook page (come join in the fun!), and one I though about a lot before creating. While it would have been more accurate to have the spider crawl up inside the spout, it would have obscured the view of him and made it hard to show the rain “washing him out”.

I decided what was important to me was being able to show the various stage of the rhyme, showing the weather (and the before/after that happens when the weather changes) and letting Jax control the spider. 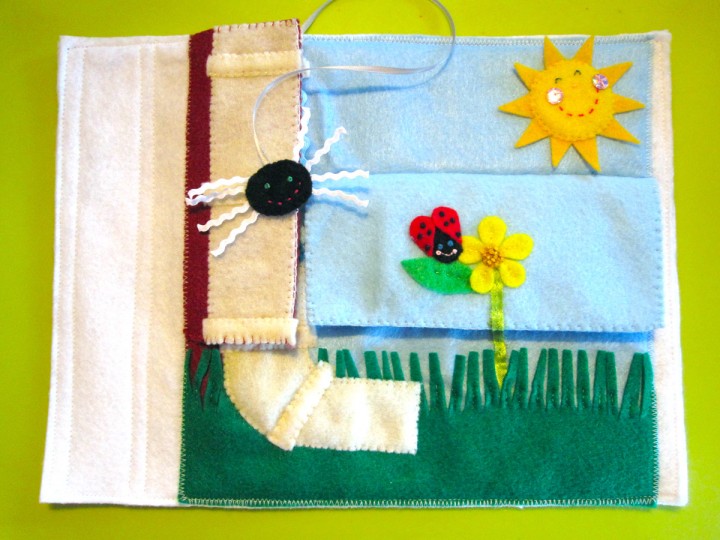 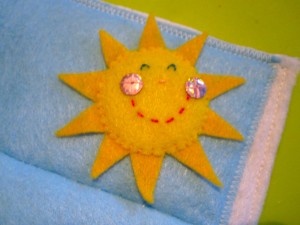 To start, I pinned down the side of the house and the grass, then pinned and sewed the gutter on top of it. I pinned a piece of green ribbon in place for the flower stem then sewed the grass in place with 4 stitches at the bottom of each stem.

Sew the face onto the sun circle. I did a dashed line of stitches for a smile, three little stitches close together for a nose and sequin cheeks. For the eyes: I made a stitch, but before puling it tight, I made a tiny stitch across the center of it that held it in an arch shape. Pin the sun to the page on top of the rays and sew it down. I left the rays loose. 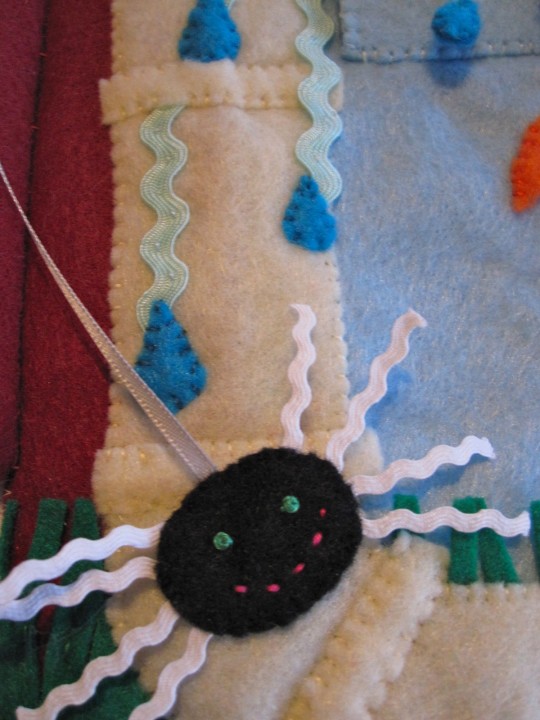 To decorate the “rainy” stage of the water spout, I sewed down some ric rac and felt raindrops. This goes on the water spout sewn to the page. To make the flap that covers it, sew the second (partial) water spout onto one of the house flap pieces, then sew them together, Sew it down to the page along the left side. 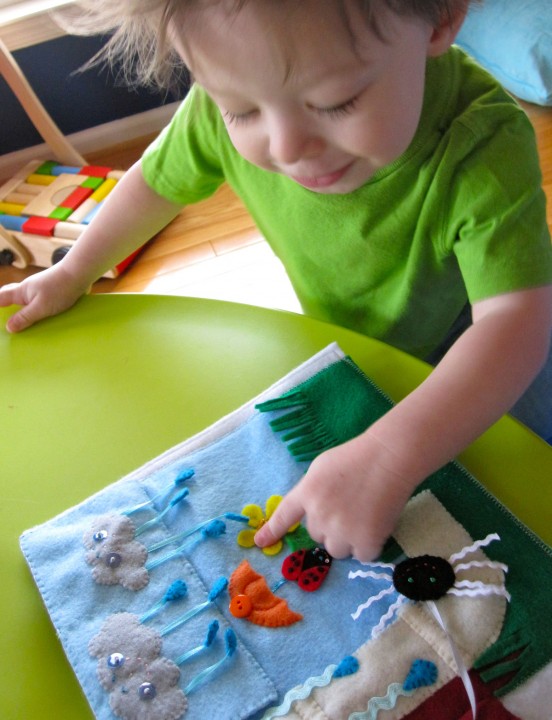 Next I made the rain scene. I sewed faces on the rain clouds the same as for the sun, but with French knots holding the sequins on. I sewed raindrops back-to-back onto the ends of ribbon scraps to make the rain. Pinning the clouds and rain to one side of the sky flap, I sewed everything down. Make sure the rain is not so long that it sticks out when the flap is folded down (the rain clouds will be upside-down when it is closed.) 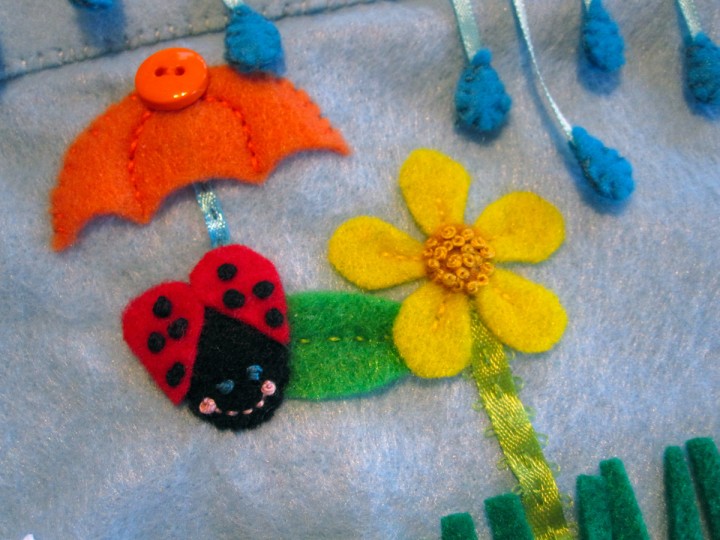 I sewed two identical ladybugs. They have dashed smiles, French knot cheeks and eyes and black French knots holding the wings on the body. Lay everything for the ladybug rain scene out and sew it down: a dashed line down the middle of the leaf, a few stitches for each petal, a bunch of French knots at the flower’s center, a scrap of ribbon for the umbrella stem and stitches around the top and on the spines of the umbrella (leave the bottom open and stretch the felt a bit for a curved look). I added a button at the top of the umbrella – just because buttons are cute! 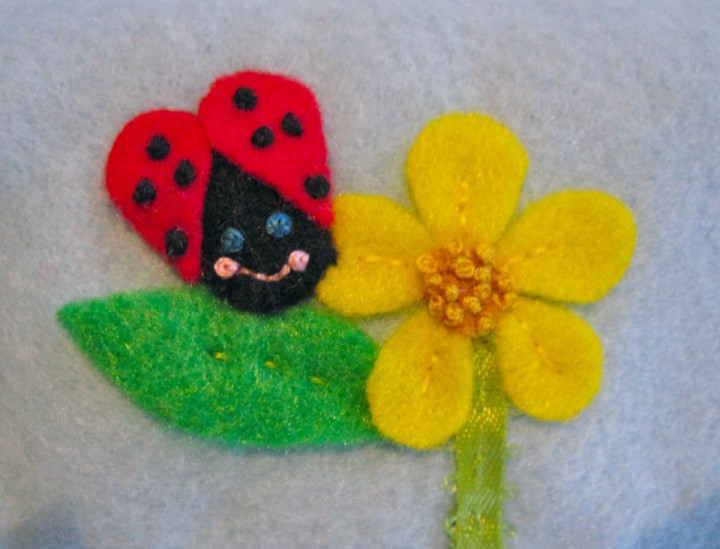 Figure out where on the page your sky flap needs to be so it covers the sun completely, then sew down a bit of the flower stem ribbon onto the other piece of the sky flap so that it lines up with the one on the page. Sew the flower and leaf the same as before. I place my ladybug in a slightly different spot, just because.

Sew the two sides of the sky flap together (the rainy side upside-down) and sew it to the page along the top. 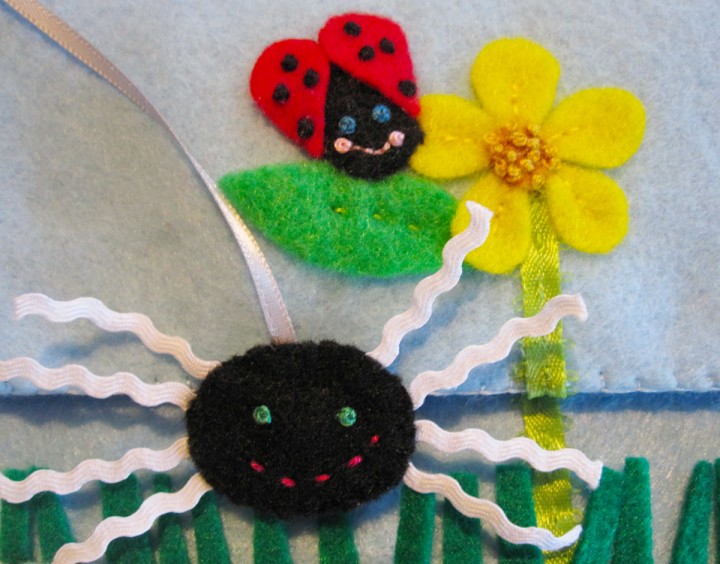 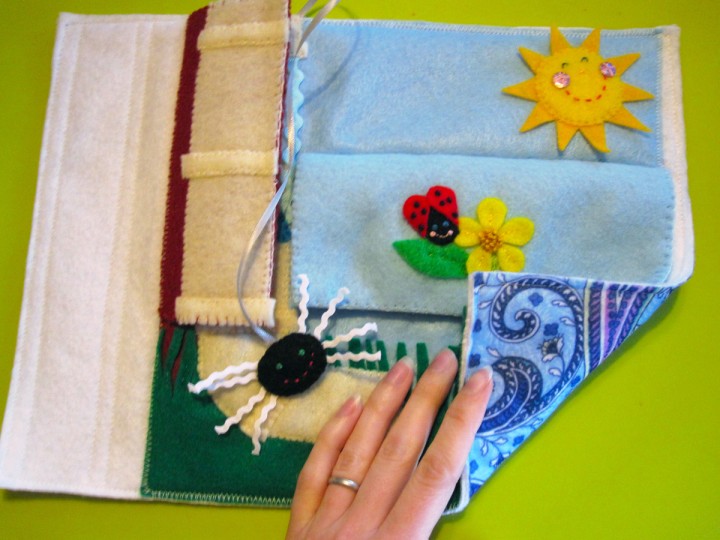 When sewing your page down to the backing, make sure to catch the other end of the spider’s “web” ribbon at the top so he is attached to the page. Stop and start at all the flap folds so you don’t accidentally sew the flaps closed. I used some cute paisley patterned felt as the back side of my page. 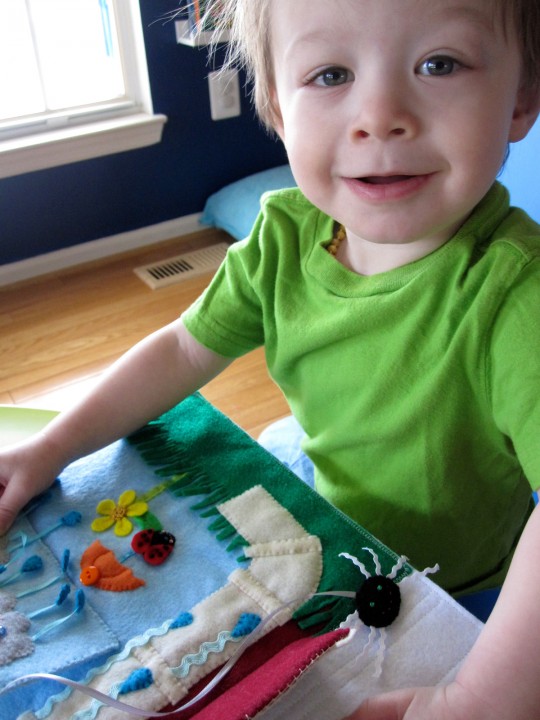 Jax can’t sing Itsy Bitsy Spider just yet (he does a great Twinkle Twinkle!) but he is starting to sing along to some of the words now that we have this page to play with. He especially loves the umbrella, which he calls a “boo-ya”!

What do you think?