I don’t usually go to the regular thrift store. We have better luck finding things at the kids’ thrift store. The regular store has so many breakables, and Jax does not like being contained while we shop anymore. So, I usually only go there when there is a specific house item I need.

This morning my thrift store “spidey sense” was going off in a big way. I told Jax we were going to the “toy store” (kids’ thrift store) after a quick stop at the regular one. I brought the Beco carrier and asked if he’d like to be carried in it so he could drink the orange juice I brought and he agreed.

We pulled up to the thrift store and were greeted by a huge heap of large children’s toys outside by the donation drop off area. I wasn’t sure if it was just a staging area or if everything was for sale. Some things were priced, but others were not. My eye was drawn straight to a pink wooden fridge. Yes, yes, yes! Ever since I got Jax his little kitchen and gave it a makeover, I’ve been hoping a wooden fridge would show up. It was packed tightly behind a air hockey table so I could only open the freezer. It had water damage like the other kitchen and a missing handle. (I realized the water damage is from the thrift store, not the previous owners. I’d thought it odd a wood kitchen had gotten wet, but it seems they leave them outside int he rain and just close the complex gate at night.) I was able to tell that both doors had working magnet closures and it sounded like there was a shelf rattling around in the bottom. It had a nice curve to the top of it that would help it match his stove.

Jax was starting to freak out a bit after about 2 minutes of me looking it over (he wanted to get down and play) so I quickly went in and did a sweep of the store. I found two scarves for me for $2 each. I took them up to the register before Jax totally melted down and asked if the fridge was for sale. They gave me a price of $10, which is the most I would have paid, and I bought it. I’m afraid I broke a set that included a broken sink and a stove, but oh well! 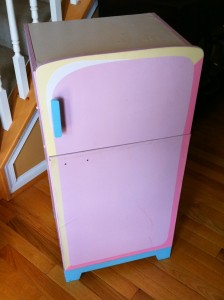 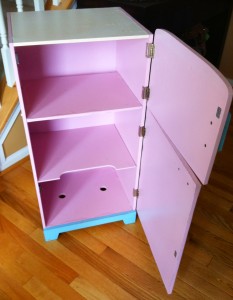 I’m pretty sure I’ll be painting it red with silver handles. I need to make a new handle for the bottom door. I’ll probably also get some shelves cut out of MDF at the hardware store like the two I added to the stove. The super thin shelf that is barely resting on some tiny dowels right now is worthless. So far I’ve just scrubbed it down and disinfected it. 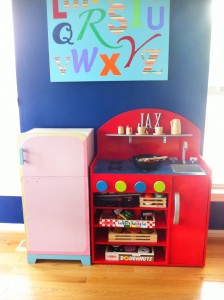 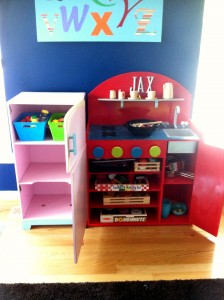 We headed over to the kids’ store next where Jax is allowed to explore and play. They allow that there, as long as you clean up afterwards. I found him a toy cash register that is basically a huge solar powered calculator. It has some laminated play money in it, but no coins. It is by Battat toys and Parent’s magazine and is no longer sold. It was $2.75. For $0.75 more, I got a wooden fire engine puzzle

to put with Jax’s other wooden puzzles in his room. 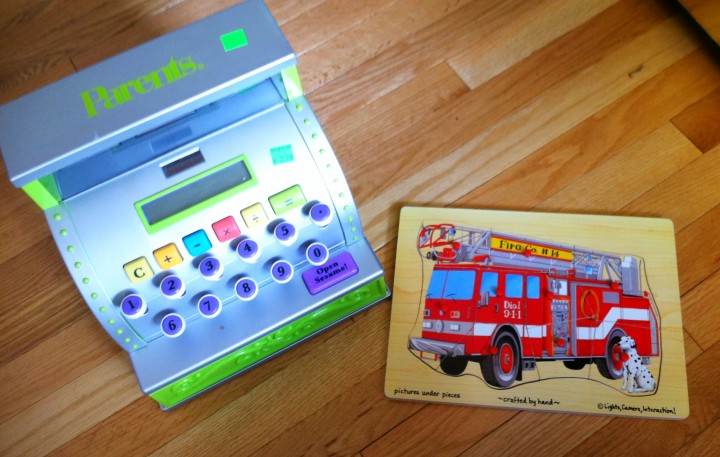 I’ve done other little thrift trips in the time since I’ve last posted about it. Ive included photos of what we’ve found. 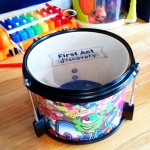 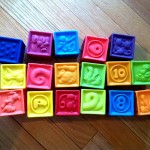 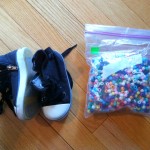 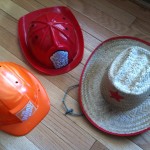 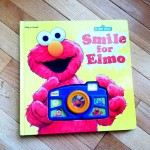 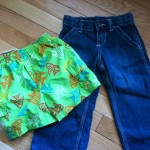 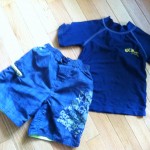 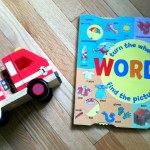 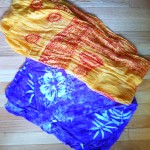 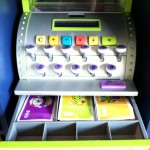