First, a quick announcement – the winners of the camping quiet book page felt and supply give away! The two winners of mini LED lights are Renee R. and Jean J. The grand prize winner of felt, crinkle material, a mini LED light and some clear vinyl is Ashley S. Congrats! I’ll be emailing you for you mailing addresses. (Renee, email me. I don’t have your email address!)

Just before my birthday weekend, I realized we were going out of town on an 8 hour round trip in the car to the beach and I wouldn’t have the supplies for my next page yet. I dug around in my stash to see what I could make from my stash of scraps. I was inspired when I looked at some of the samples sent to me by American Felt and Craft. Sprinkle beads, nut beads and a felt cherry? Sounds like an ice cream sundae to me! 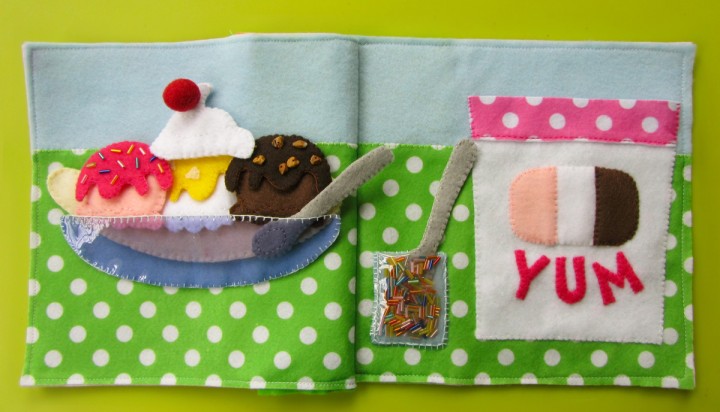 I went with a banana split and had just enough of the green dot felt I used in the ice cream parlor page to make them coordinate. I actually had to sew an extra seam to make the pages smaller because I didn’t have enough light blue and green dot to cover the whole 9″ x 12″. 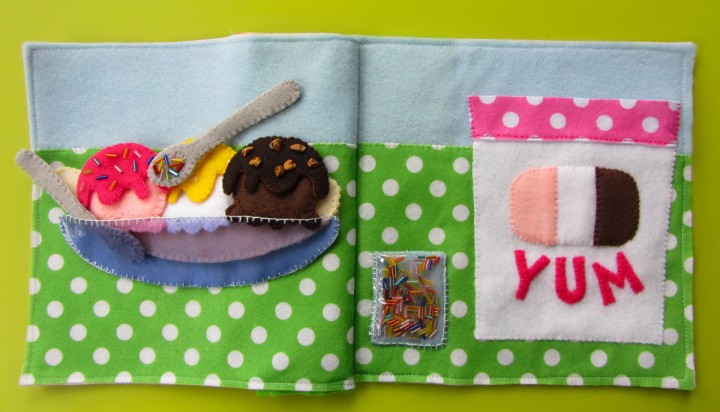 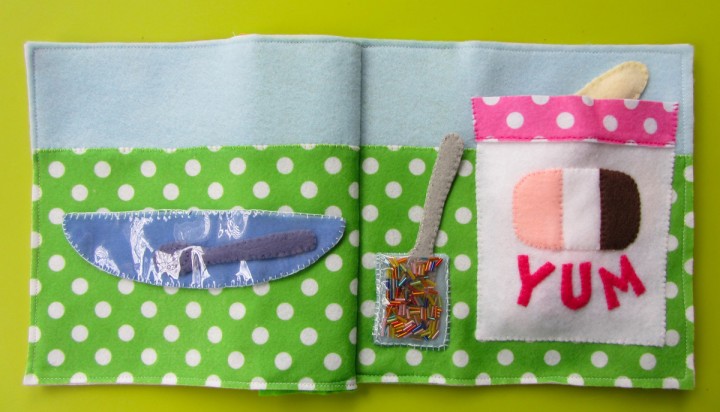 The Background: Very simple… just sew a table onto your background felt! Later, you can add snaps to attach the sundae dish. 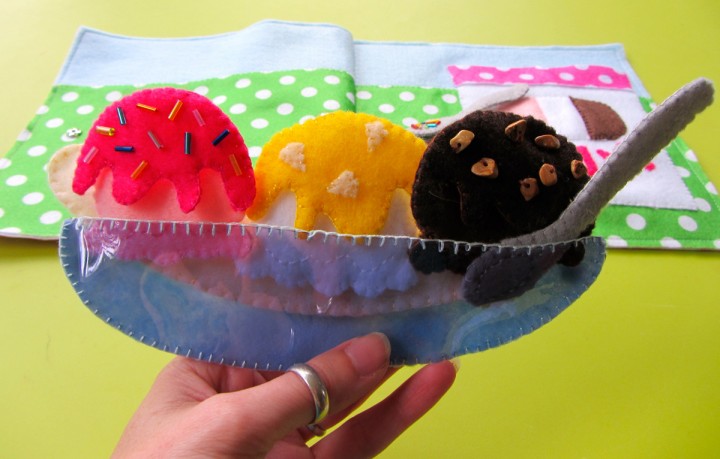 Sundae Dish: I sewed light blue felt and blue tinted vinyl together along the curve of the bowl to make a pocket, then I sewed across the top of the vinyl to make that edge match the others (and make it feel less sharp.) I sewed three snaps along the back so the bowl can come off, but you could just sew it to the page.

Ice Cream Scoops: I sewed the two sides of each scoop together with some scrap felt in the middle to give it some thickness. You could use batting, but I was in the car and that was what I had! 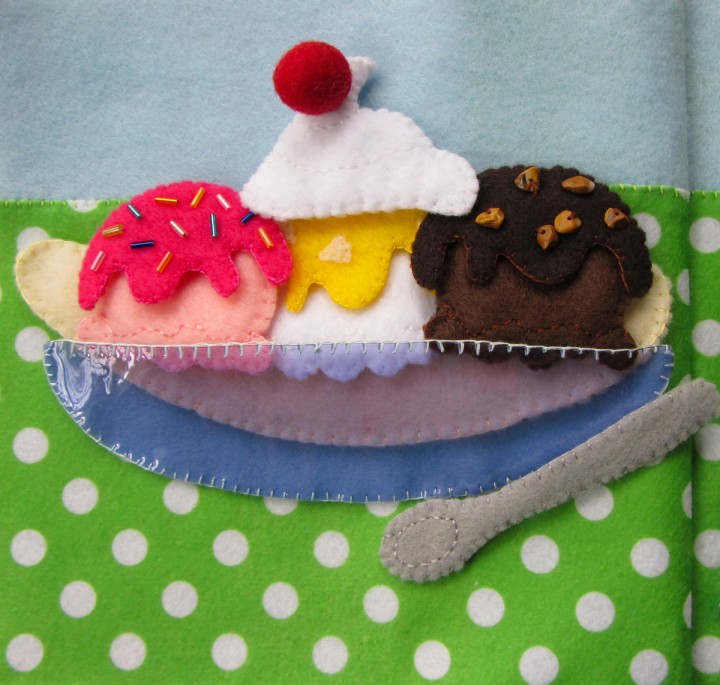 Sundae Toppings: I sewed the toppings the same way that I sewed the ice cream scoops, except I decorated the front pieces first.

Strawberry: I sewed the sprinkle bugle beads to the strawberry topping.

Chocolate: I sewed the nut beads to the chocolate sauce.

Whipped Cream: I sewed the cherry felt ball on to one side of the whipped cream, making sure I really secured it down with a bunch of stitches. You could use a circle of felt stuffed with some batting instead of the felted ball. I then sewed the two sides together. 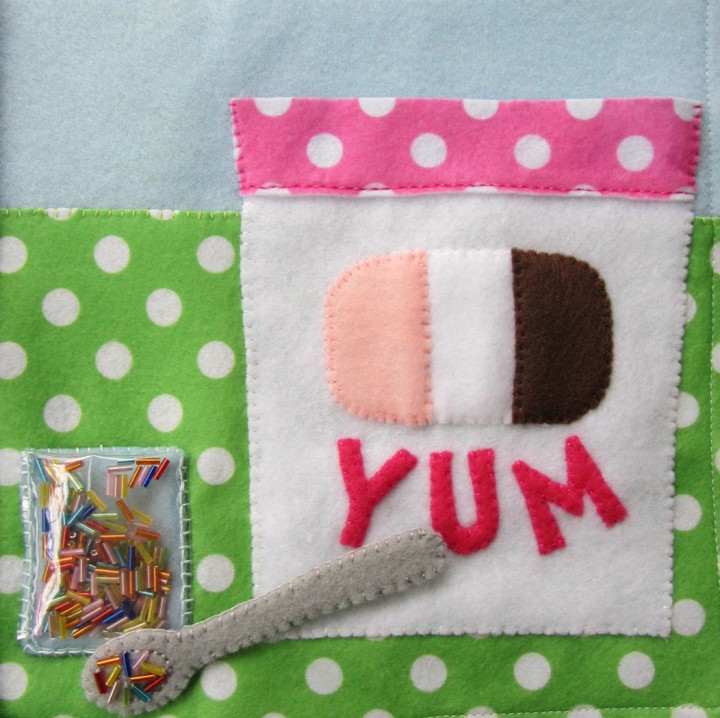 Ice Cream Tub: I sewed the pink top piece to the main white tub piece, overlapping them a bit. I sewed on the lettering and the oval ice cream colors. (Sew the white of the oval on first, then layer the pink and brown over it so they line up.) I then sewed the ice cream tub on the the page along the sides and bottom to make a pocket to hold everything.

Sprinkle Jar: The sprinkle jar is a pocket for the spoon to go into. The front of the pocket is made of two layers of clear vinyl with sprinkle beads sewn inside. I started by sewing the light blue background to the page. Then I folded my vinyl in half and started sewing around the edges. With one side still unsewn, I filled the vinyl pouch with beads then sewed it shut. I placed it over the blue background with the smooth folded edge up, and sewed the sides and bottom down, making the pocket.

Spoons: The spoons are just two layers of felt sewn together with some decorative back stitching on the bowl to give it depth. I also sewed on the sprinkle beads to the spoon that goes in the sprinkle jar.

This page sewed up very quickly! It was a good project for the car, though I did all the beading in the hotel and at home so I wouldn’t spill. You could definitely mix and match the elements from the ice cream parlor page and this one. I just scaled the ice cream a bit larger for this page. 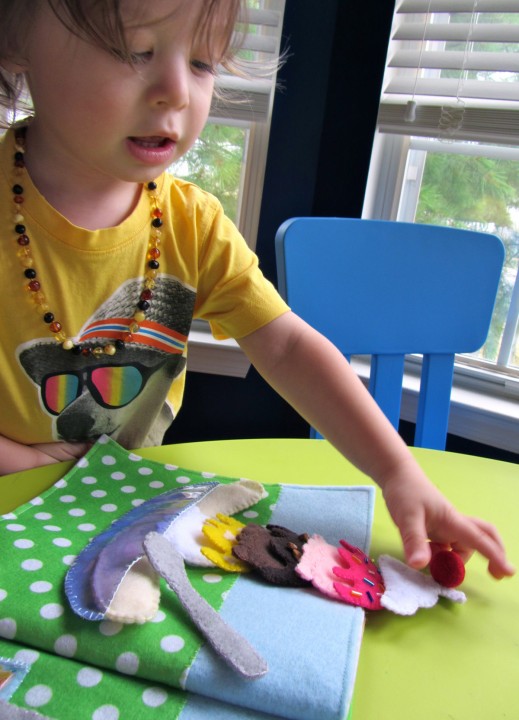 Jax enjoys it, but I knew he would – all of the food pages are big hits for him! The first thing he did was take all the parts and put them in and out of the ice cream tub. Then it was time for a tower of ice cream! And, don’t try to separate him from that sprinkle spoon! It is a prized possession! 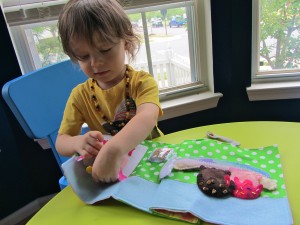 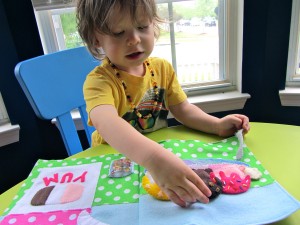 Enjoy! If you make one of my pages, I’d love to see… Email me a photo or post it on the Facebook page.