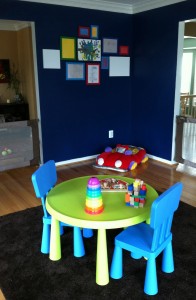 Our playroom has been a blank canvas since before we even became parents. I love color and painted in a rich blue despite the fact we had now furniture for it. It became the craft room whenever I’d host a party. The room has seen: painting, coloring, photo booths of various themes and even tie-dye (with a tarp down on a hot, stormy day).

When Jax became mobile, it was clear he needed a safe place of his own to play – free from hazards and dogs who steal baby toys (and shred them into 10,000 tiny pieces. Don’t ask.) So we put up some great wide gates (that double as travel gates when we rent a beach house) and got a soft, brown rug from Ikea. 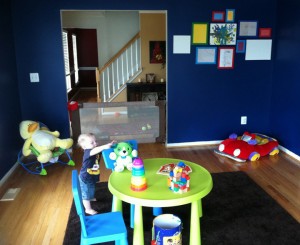 Fast forward to now… The playroom is Jax’s favorite place (besides my breastaurant! Hah!) and he runs to the gate, begging to “pway”. He’s getting old enough to start taking interest in different activities, so as a part of introducing him to art, I wanted to introduce art to his playroom. Back to Ikea we went (with the long drive perfectly timed during nap) where we chose a table a chair set for him to play and make artwork at.

My other reason for going was the great, inexpensive frames they carry. I chose four large frames and four small ones in bright colors. Back at home, I laid them out on the dining room table, along with his first painting and two blank canvas he’ll paint on soon. When I was happy with the collage of frames, I put them up on the wall, eye-balling it, as I wasn’t feeling too particular about placement. I have a feeling the gallery will grow and change with time anyway. 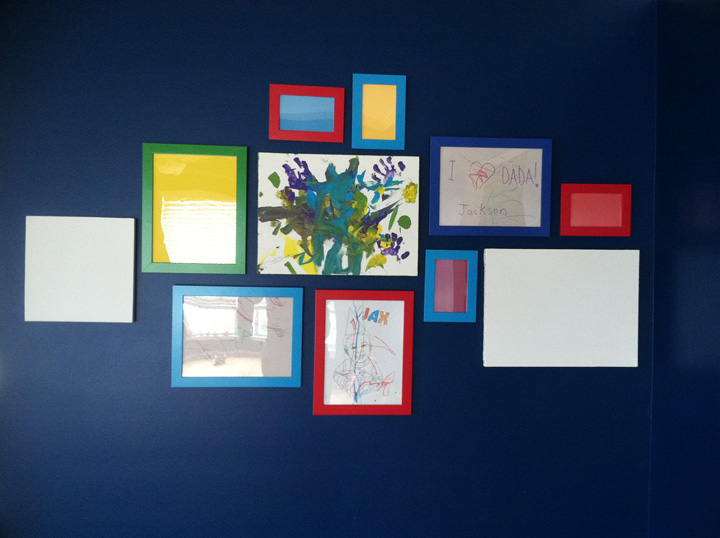 For now, the plan is to rotate his paper artwork in the frames and hang all his canvas art up as well. As you can see, his first painting currently holds a place of honor. I painted over the edges to hide the staples using one of the colors we had used. The bottom half of that wall is going to become a chalkboard eventually. I might have more fun with that than Jax!

How do you display your child’s artwork? I’d love more ideas, as I know I’m going to have a hard time letting go of any of it!