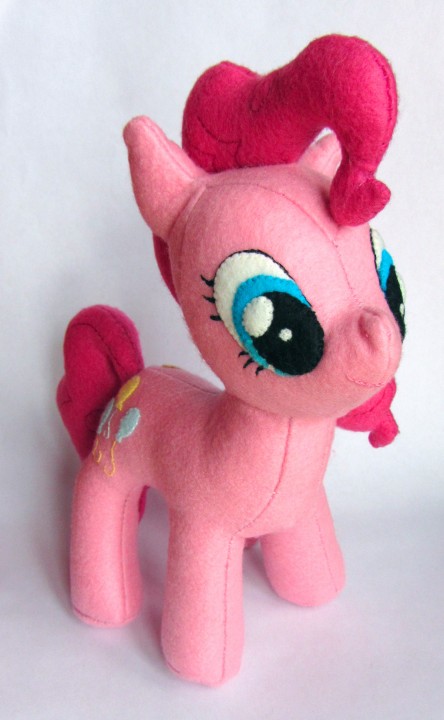 When I asked my brother if there was anything I could make for my niece this Christmas, I was a little overwhelmed when he suggested a My Little Pony – Friendship is Magic plushie of “Pinkie Pie”. I’d never sewn a stuffed animal before, and I’d be a pony newbie creating something to give to a pony expert! 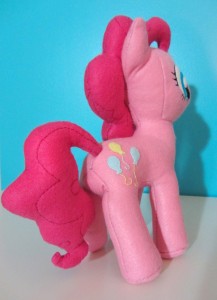 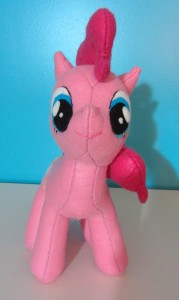 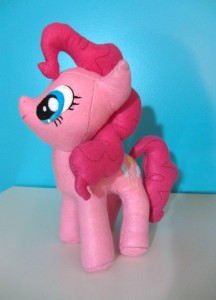 I let the idea brew in the back of my mind for a while, as I tend to do for all sewing projects, when one day a box full of gorgeous recycled felt arrived from a friend. Two shades of pink? Check! The project was on! I planned an entire weekend of sewing, but ended up adding 2 evenings so I could add pony clothing to the gift.

The felt was purchased from FeltForLess on Etsy, who is unfortunately closed over the holidays as I am writing this, so I do not have prices for you. I will say that the thickness is similar to the wool blend felt I get from American Felt and Craft. It seemed to stretch a bit easier than the wool, and didn’t have the subtle color variations that make wool felt so rich. But the colors were bright and it cut like dream. I had no trouble working with it. I did lack that subtle “wool sweater feel” love so much about wool felt, but I’d use it again! (FYI – when sewing the pony construction (anything getting turn right-side-out afterwards) I preferred to use two strands of machine thread instead of my normal 2 strands of floss. It seemed stronger.) 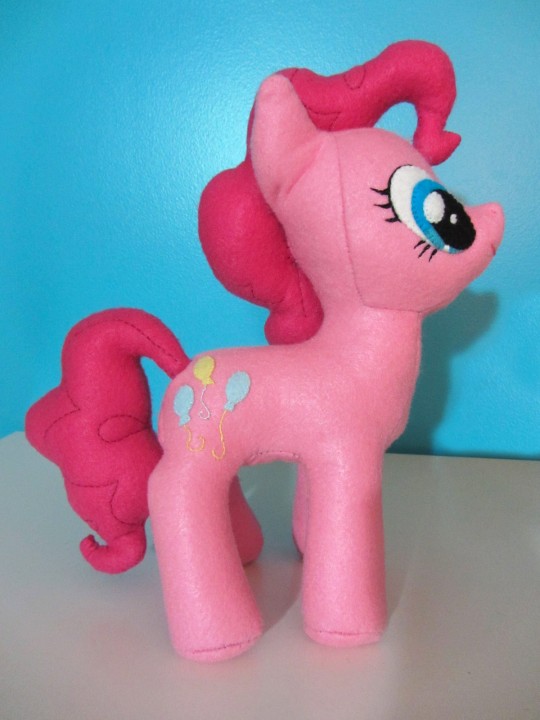 As I had never made a stuffed animal, my first stop was to find a pattern for the pony’s body. There are many free patterns online for MLP. While there are people out there that make and sell these plush ponies, I think it is risky due to copyrights. All the patterns I saw were free. I did a quick search, but chose the most complex pattern I found. I liked that it was more accurate thanks to details like darts by the legs. Thank you Voodoo-tiki for the great pattern and tutorial!

I enlarged the pattern a bit. I didn’t want to deal with turning it right-side-out with tiny parts made of felt. Even enlarged, I still ran into that with the main and tail. If you want to make a pony of similar size to mine, resize the pattern so the height of the “body side” piece is 11.25″. I had to break up the two largest pattern pieces over multiple pages to print them. 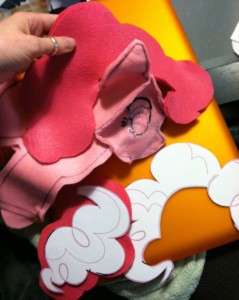 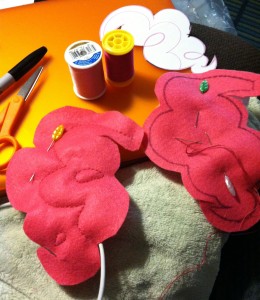 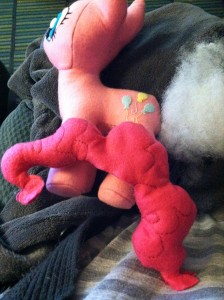 For the main and tail, I used the same technique mentioned in this tutorial to create a pattern. Thank you Meowplease! When I sewed the swirl patterns of her hair onto the felt pieces, I added a layer of batting to the back to add dimension. It would have worked better with more batting and thinner fabric. My results were subtle. I ran into trouble while trying to turn the sewn piece right-side-out. The little flippy curls were too small. I ended up ripping out the stitches for all the tiny curled bits, then sewed them while the piece was right-side-out using a ladder stitch. I used this technique to attach the main and tail. Thank you MLPPlushies! 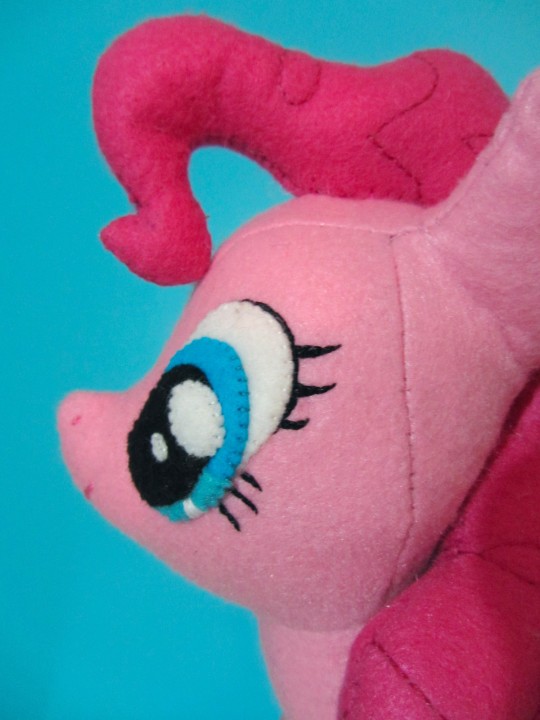 The eyes were my own creation. I do not have an embroidery machine (that’s called “my hands”!), which seems to be the preferred way to sew pony eyes and “cutie marks” (butt tattoos!) I layered felt ovals to make all the main parts, added a wedge of lighter blue at the side of the iris for shading and stitched a satin stitch wedge of white for a highlight. The eyelashes were a combination of back stitch and satin stitch. In my quest to do well, the eyes took 3 hours! 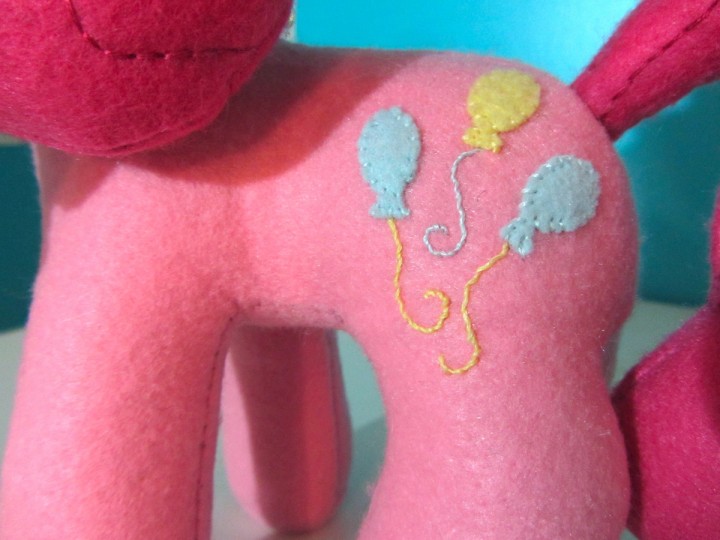 The “cutie mark” was done in felt. I started out with the balloon strings done in back stitch. I decided I wanted something more solid, and wove my needle right-to-left through every stitch to fill it in. The result was similar to stem stitch, which I used for the mouth. The “cutie marks” took me an hour each. 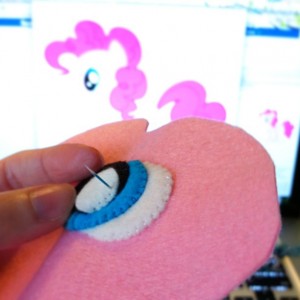 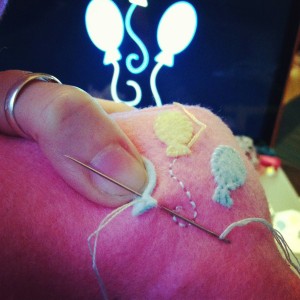 The clothing was all my own ideas. While I searched a bit through images online, thanks to my brother’s information, I decided to do my own thing. I didn’t have the materials needed to do anything “show accurate” so I went with colors that matched Pinkie and my niece liked. 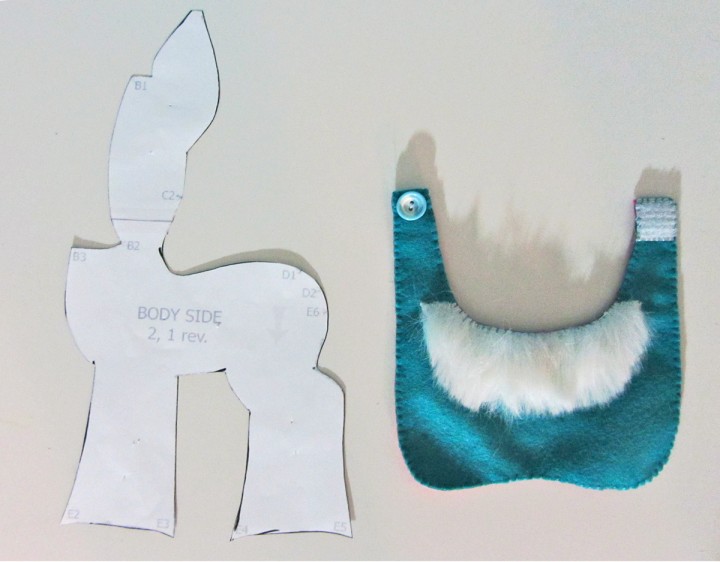 The cape was made with the darker pink eco felt on the inside and peacock wool felt on the outside. I cut a bib shape with a slight concave curve at the bottom to allow for her tail. I used snag-free Velcro

to close it and decorated the front with a vintage button of my mother’s. I also sewed on a collar of faux fur 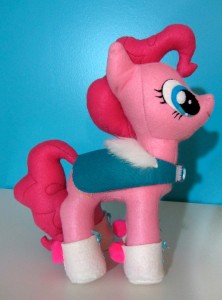 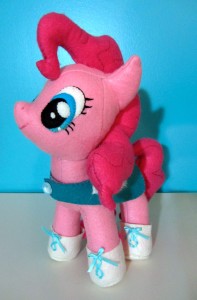 I wanted some boots for her, despite the fact I’d have to make 4 of them. I used some of the eco felt in white, and cut circles slightly larger than her finished feet. The boot bodies were strips of felt with a subtle curve. I wrapped the first one around a leg and trimmed it to make a template for the others. I had it long enough to overlap the seam. 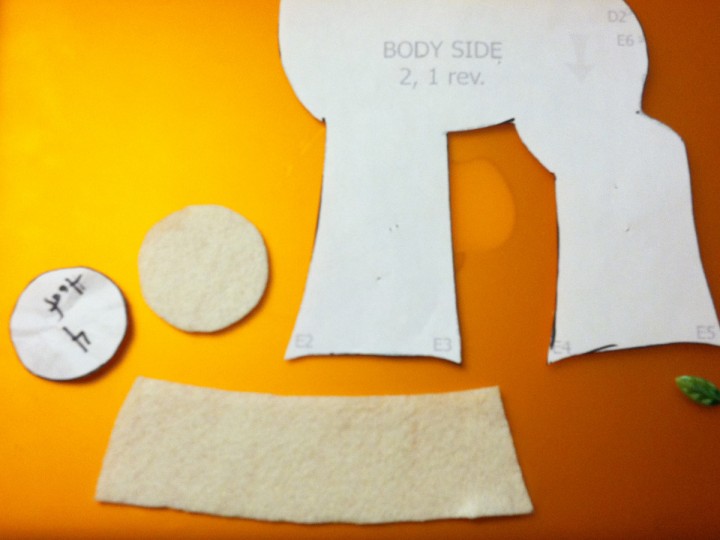 I kept the seams flat by stitching little stitches across both overlapping edges in each boot. Then I turned them inside out, sewed on the bases and flipped them back right-side-out. I stitched pompons onto the backs and stitched crisscrossed ribbon onto the fronts as laces. 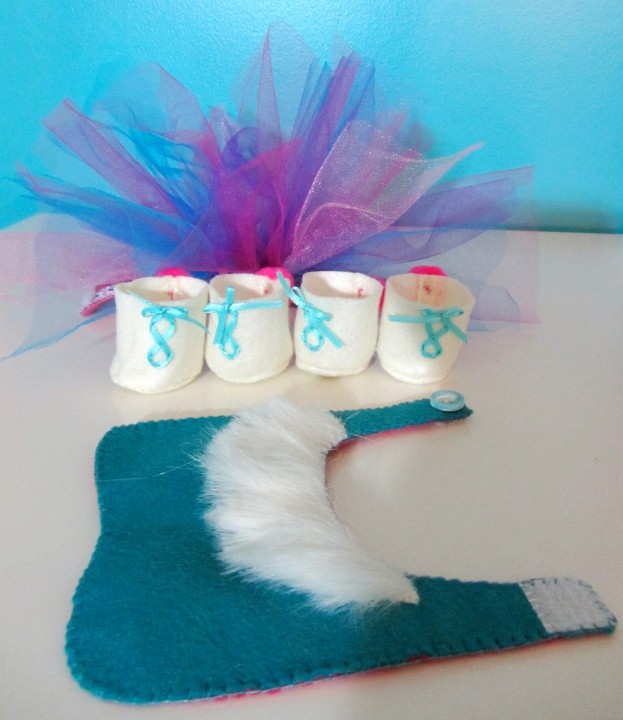 The tutu was added into the mix because the ponies had “gala dresses” that seemed to be a big deal. While I couldn’t make Pinkie Pie’s actual dress without candy corn ribbon, I decided to make a quick skirt to turn the cape into a dress. I took a bit of elastic and strips of leftover tulle from my sewing stash, looping the halved strip through themselves to attach them. (A quick search just now brought up the same technique here.) 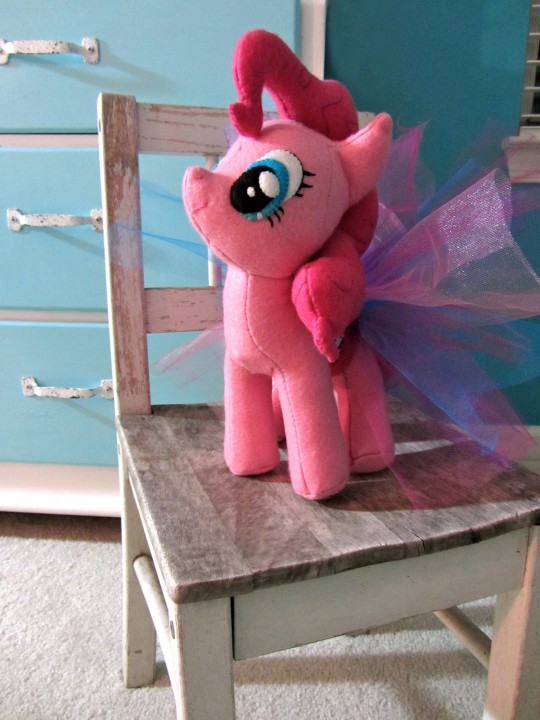 This little chair was $3.75 at the thrift store. Perfect school chair!

I didn’t make the elastic go all the way around her waist like I’d originally planned. Instead, I sewed the elastic and the tops of each tulle strip to a long piece of the darker pink felt. I added a length of cupcake ribbon (Dollar Tree!), sewed another piece of felt to the back as lining, and added more snag-free Velcro to close it. It looks more finished that way. 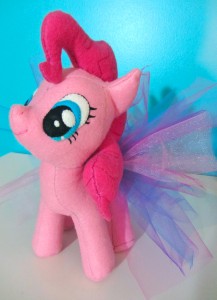 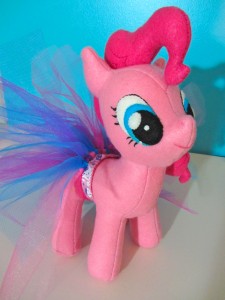 My niece got to open her gift this morning, while my brother’s family was on their way out of town for the holidays (and my grandmother’s funeral). 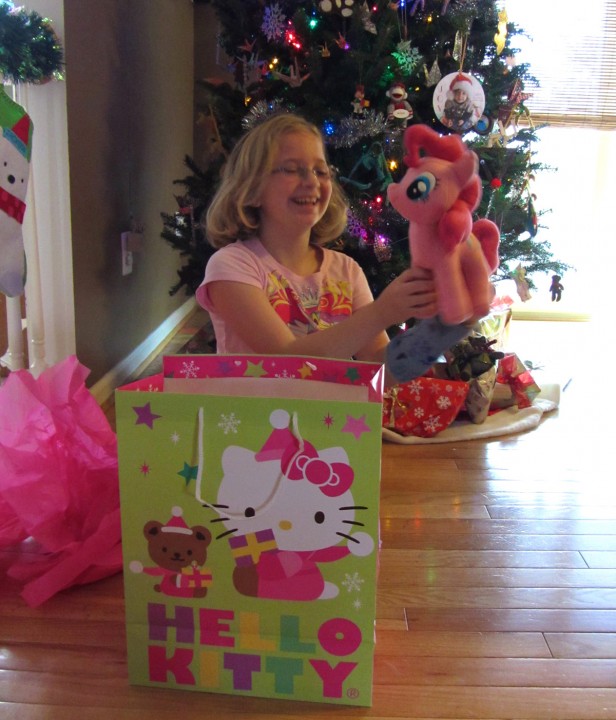 She seemed to really love it. Mission accomplished! 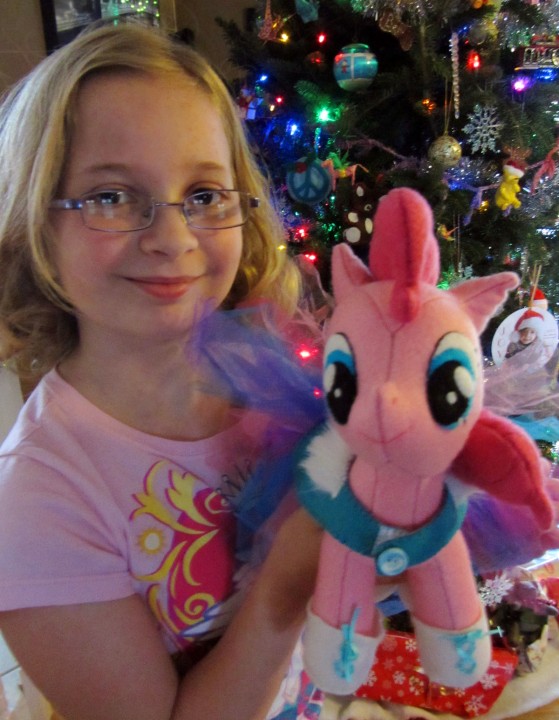