I wanted a food page in Jax’s quiet book, because he is so into his play kitchen. Since I already did a Starbucks page, I decided to make the food page go along with the same theme.

Nothing too fancy here. Just a lot of food and a plate to play on. You could add silverware too. I didn’t because he would just try to put the food on a felt fork and end up dropping everything on the plane. I made so much food, I had to make two “pastry bags” to hold it!

and embroidery floss to match. 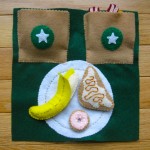 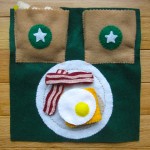 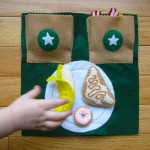 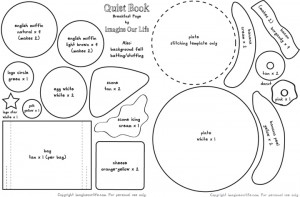 Mini Birthday Cake Donut: Make white French knots as sprinkles on the pink frosting. Sew the frosting to the donut top. Roll a strip of batting into a ring and sew it between the two halves. Banana: Roll a strip of batting into a tube and sew it between the two banana pieces. Using one strand of dark brown thread and a sharp needle, take your peel pieces and run the thread up through the felt as if the felt was made of two layers and you were going between them. Every now and then, come out of the felt and loop back to make a random stitch on the surface, then go back into the felt. Do this to make all the subtle, dotted lines that form on banana peels. Sew the two sides of the peel onto the banana halfway. You could add snaps or Velcro if you wanted the peel to stay closed. 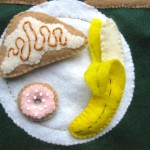 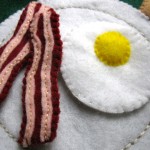 Pumpkin Scone: Take a piece of embroidery thread and knot the end. Come up from the back of the icing and lay the thread out in a squiggle as you’d like to have the decorative icing to look. Go back down throughout the felt, being careful not to disturb your squiggle. Make a series of couching stitches all along the squiggle to hold it in place. Sew the icing to the top of the scone, then sew the two halves together with some batting in between. 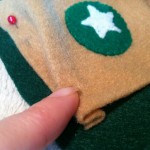 Pastry Bags: Decide if you need one or two bags. If you make all of the food, you need two! Sew the stars to the green circles to make the logos, then sew them to the center of the bag pieces. You will be making a pleat in the bottom of each side of the bag, like in the photo to the right. Sew the edge of the bag down until you are an inch from the bottom, then sew through the edge and the fold above it. Sew across the bottom, then through the edge and the fold for an in, then up the edge to the top. Leave the top open for a pocket. 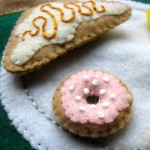 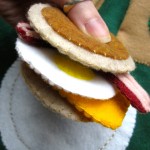 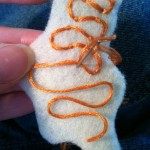 Plate: Sew the plate down to the background then pin the stitch template to the center. Stitch around the template with gray thread to make the plate edge. 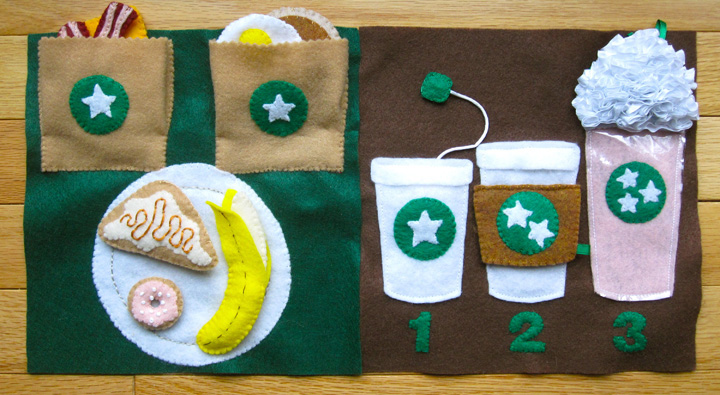 I’ll be sewing this page into the quiet book beside the Starbucks drink page. The logos tie together and you can dunk the donut in the tea or put the strawberries on the plate. 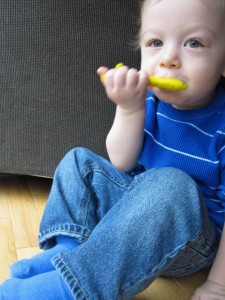 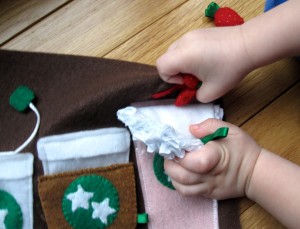 If you use this pattern, please add a comment or link to me. I really would love to see your version! Jax loves these pages and had a meltdown after I finished taking pictures and put it away. His favorites are the banana and strawberries (neither of which he likes to eat in real life, silly boy!)

Here is an update on this page.