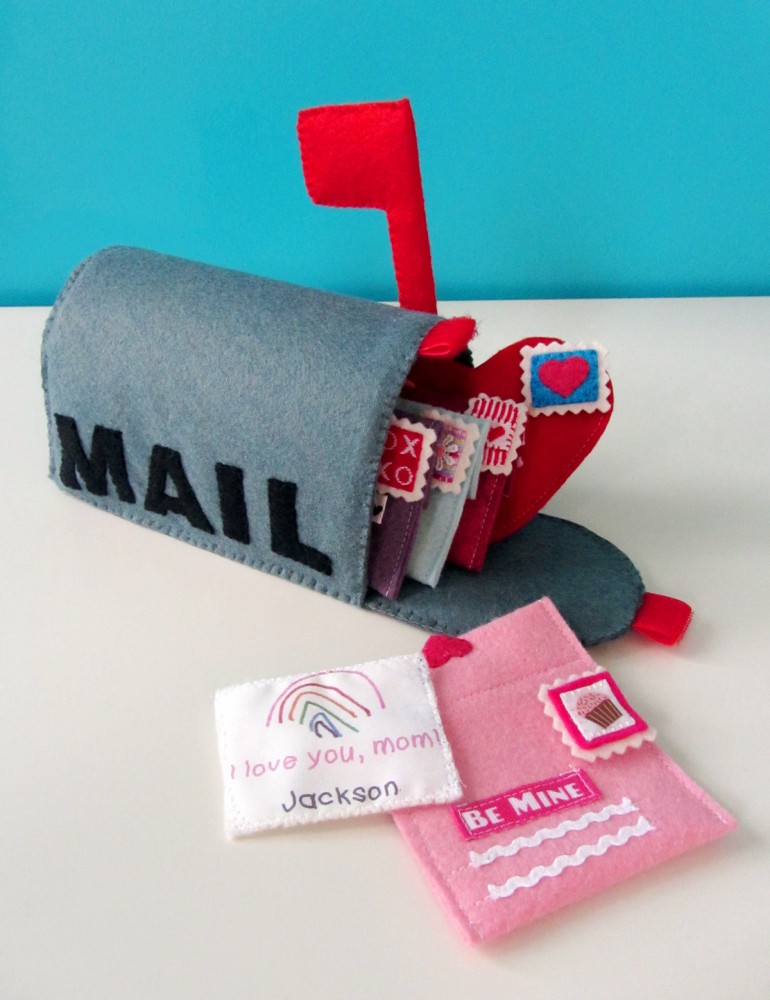 I really wanted to make something cute for Jax to play with this Valentine’s day. He loves checking the mail with me (and our post box!), and he loves putting things into other things. Simple pleasures, I guess! While I’ve already made him a mail box quiet book page, I wanted to make him something 3 dimensional that he can have for his playroom. As a bonus, it will help him learn about the process of writing and sending letters.

Big, big thank-yous to reader Jill, who gifted us with a roll of photo fabric. Thanks to her generosity, this project is so much more personal and special. 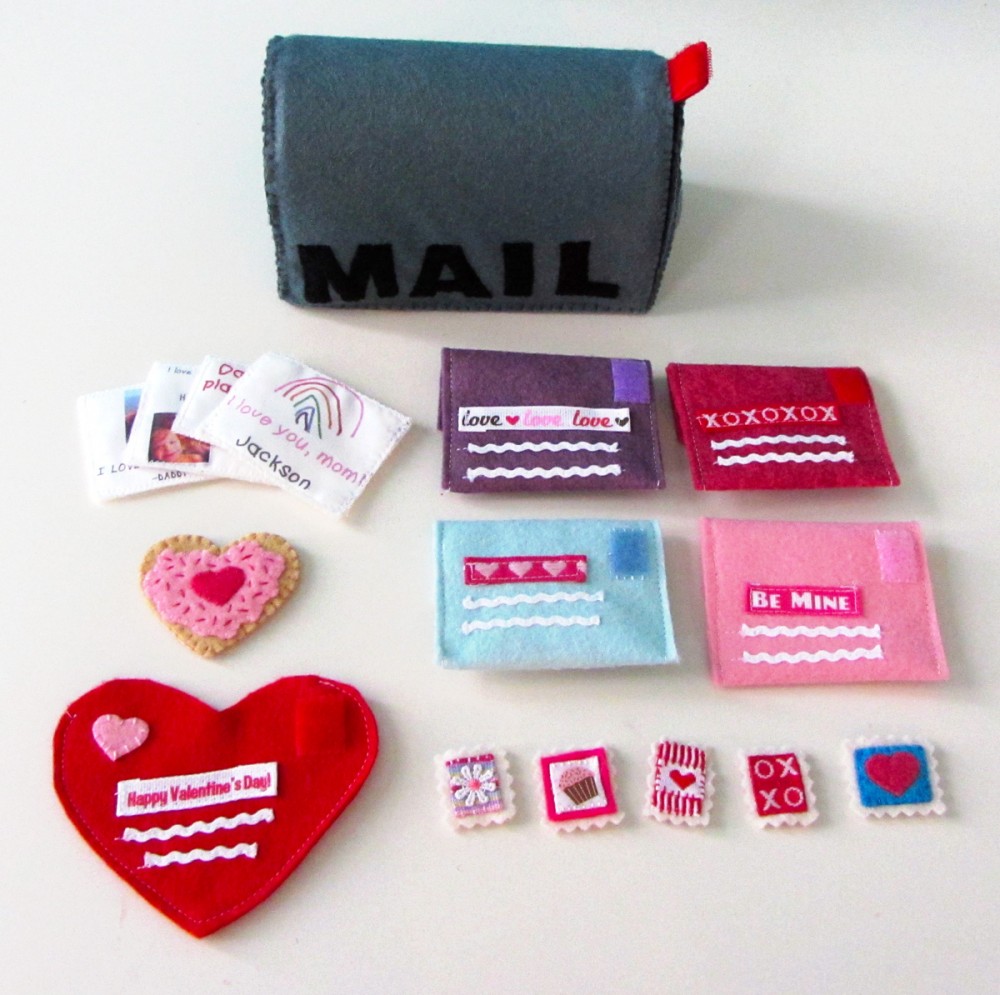 Mailbox: I started but stitching the MAIL letters down to the outer layer of the mailbox top piece. I cut a piece of plastic canvas 1/4″ smaller all around than the felt, and sandwiched it between the two layers. I pinned it well, then sewed along the long edge by the L, pausing halfway to insert a folded piece of red hook (soft) Velcro. 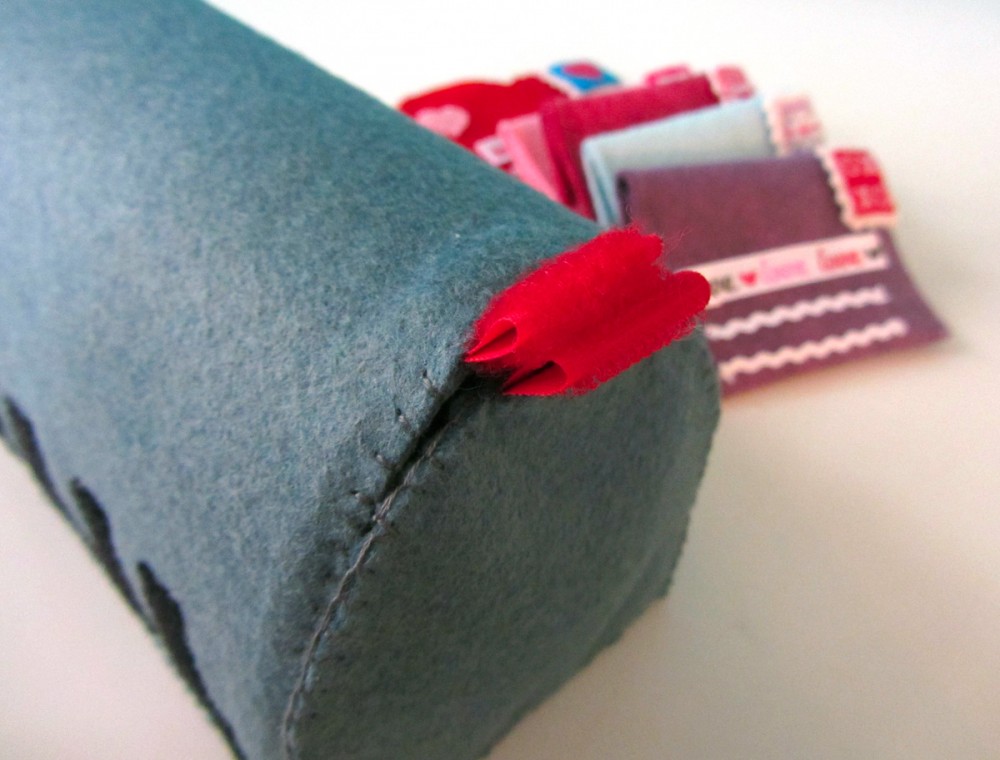 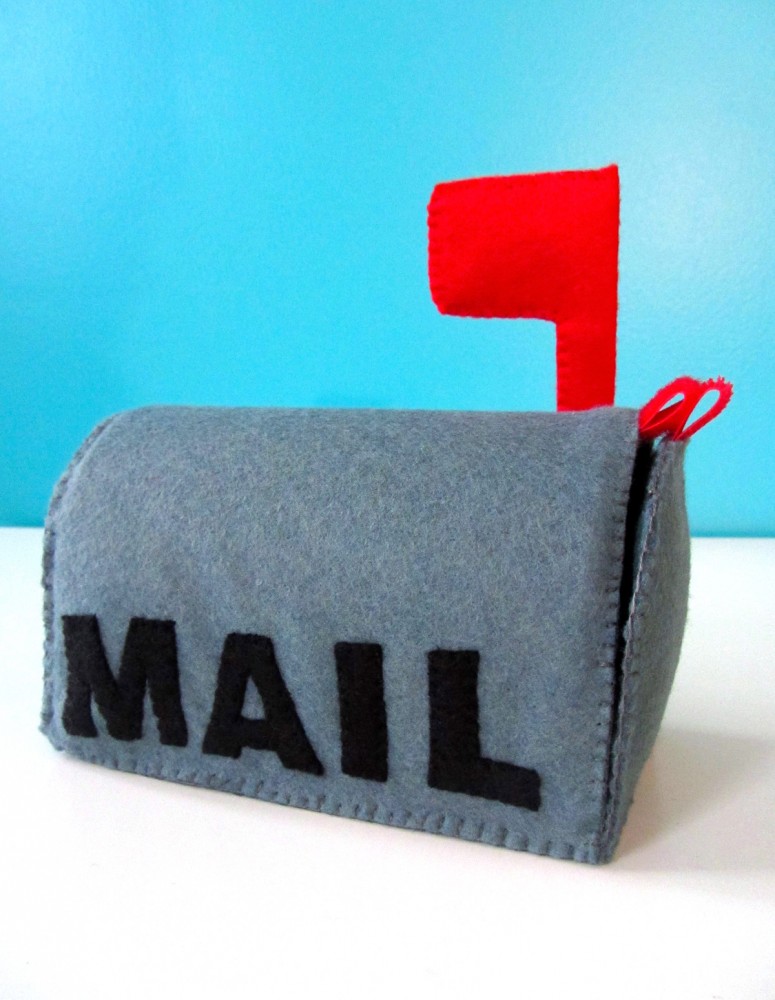 I cut two pieces of plastic canvas 1/4″ smaller around than the mailbox door/back pieces. I pinned them between the two sets of felt and sewed around the curved edges of one, catching a folded loop of red hook (hard) Velcro in the middle of one. I sewed the one without Velcro to the back of the mailbox all around. I sewed the door with Velcro to the front, laying inside the mailbox and sewing it along the bottom before pulling it out. 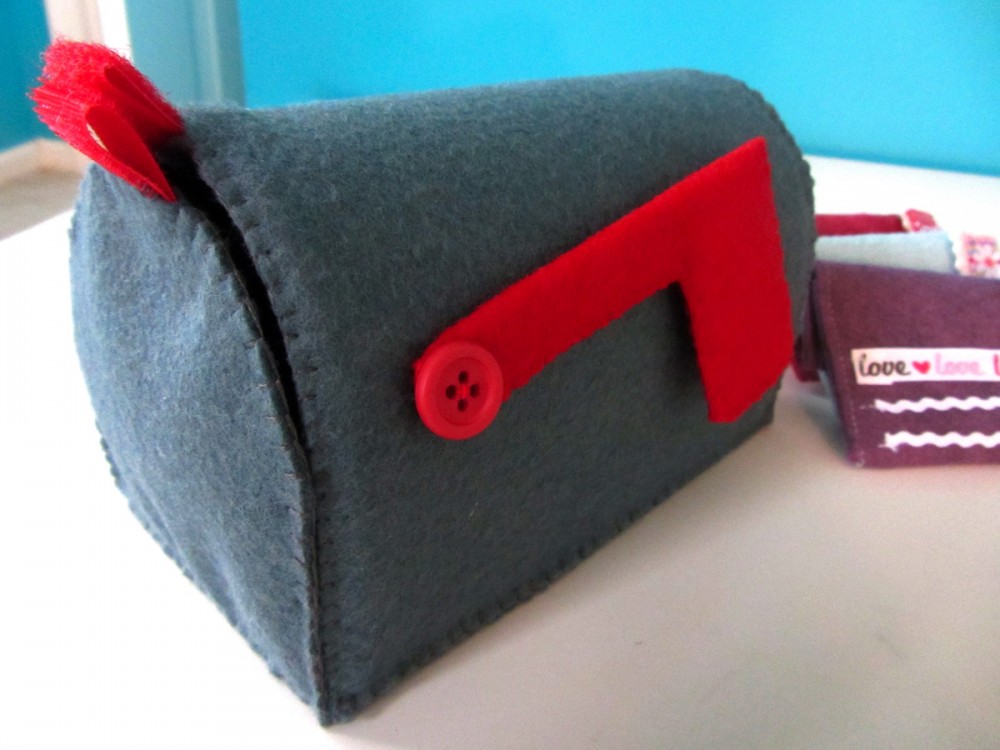 I cut some plastic canvas to go inside the mailbox flag, but you might be able to get away without it. I didn’t have the canvas go all the way down the post – I left room at the base so I could cut a small hole through the whole flag after sewing the layers together. I stitched around my tiny hole with a buttonhole stitch. You could perhaps use a tiny eyelet, but you really only want the hole big enough to sew a button though it. If it is too large, the flag will just flop down. After I sewed the edge of the hole, I very carefully sewed a button to the side of the mailbox, running the stitched through the hole in the flag to attach it. I took some red scrap ribbon and wound it between the mailbox and the button until the flag stopped flopping but could still move, then tied the ribbon in a tight knot and trimmed it to hide it. 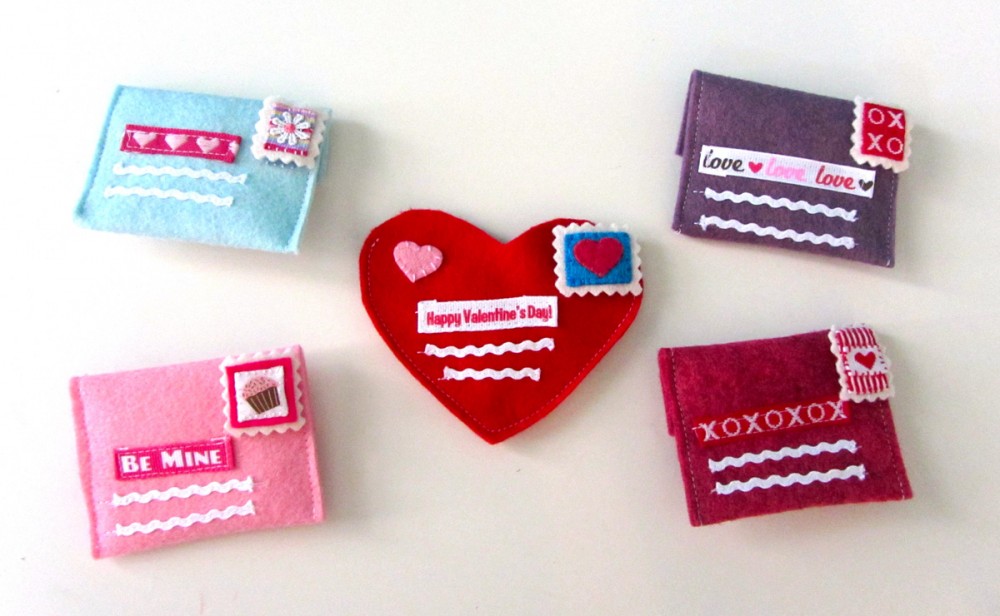 Envelopes: I cut one piece of felt for each envelope. With the wrong side up, I folded the top part down and the bottom part up, and pinned to find the positions of my Velcro. With them unpinned, I stitched Velcro in place to close the envelopes and some loop Velcro on the front corners to hold stamps. 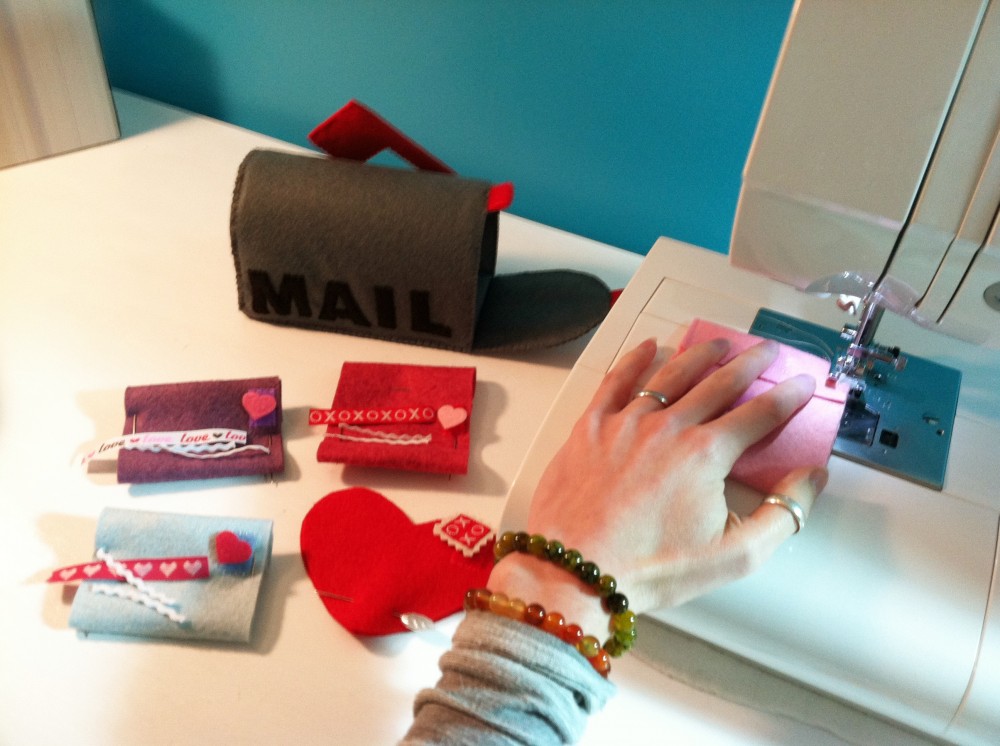 I used my machine to sew scraps of ribbon and ric rac on as the address, then refolded then and sewed along the sides and the edge where the top is folded down. I finished them with a little felt heart (cut from a trim I got at Target) to the envelope flap. 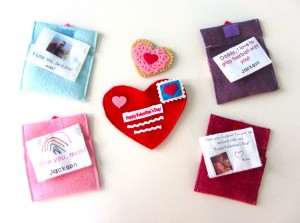 Heart Envelope: I decorated the front with ribbons and ric rac the same as the envelopes, and I added some Velcro for the stamp. I sewed on a little felt heart to look like a sticker. Then I sewed around the edge, leaving the top open. 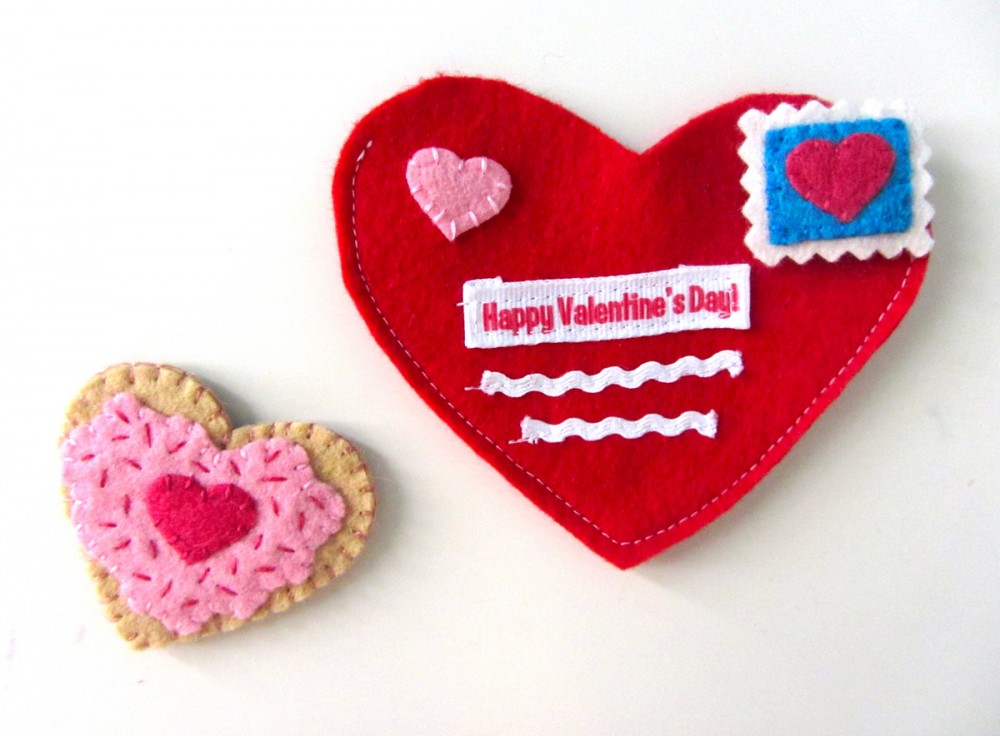 Sugar Cookie: I sewed the pink icing down to the top cookie piece, the added a felt heart and some long stitches as sprinkles. Then I sewed the front and back together. 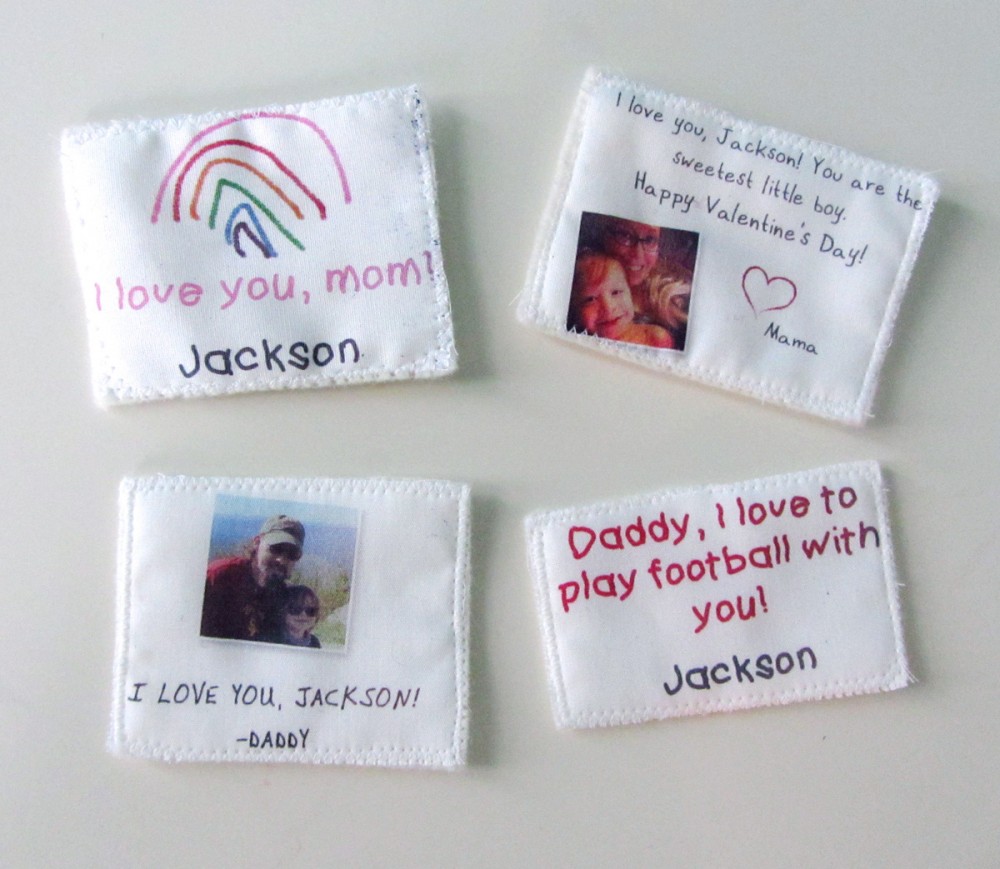 Letters: I did some prep work before creating the letters. Using my hand-me-down iPad 1 and the app iFontmaker, Jax and I made handwriting fonts. I used those to type out small Valentine messages in Photoshop (you could even use Word). I just chose a font I had for my husband’s letter. I asked Jax questions to figure out what to write on his letters, as he doesn’t understand Valentines yet. Then I had him draw me a picture (rainbows are the only thing he draws besides squiggles) in our Drawing Pad app, and I added that and some little photos. 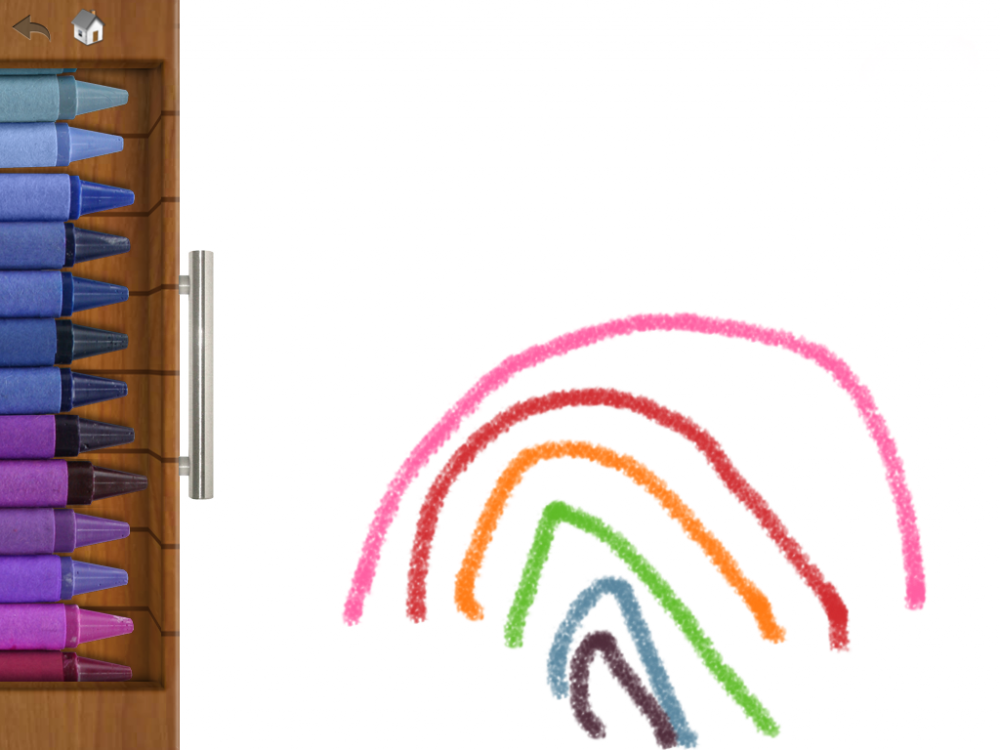 I cut my photo fabric down to fit my 4×6 printer – the only one in the house that currently prints black ink (I’ve been printing pattern is pale gray for months!) It worked great, but I did get smudges of ink on the rainbows both times I tried printing it. 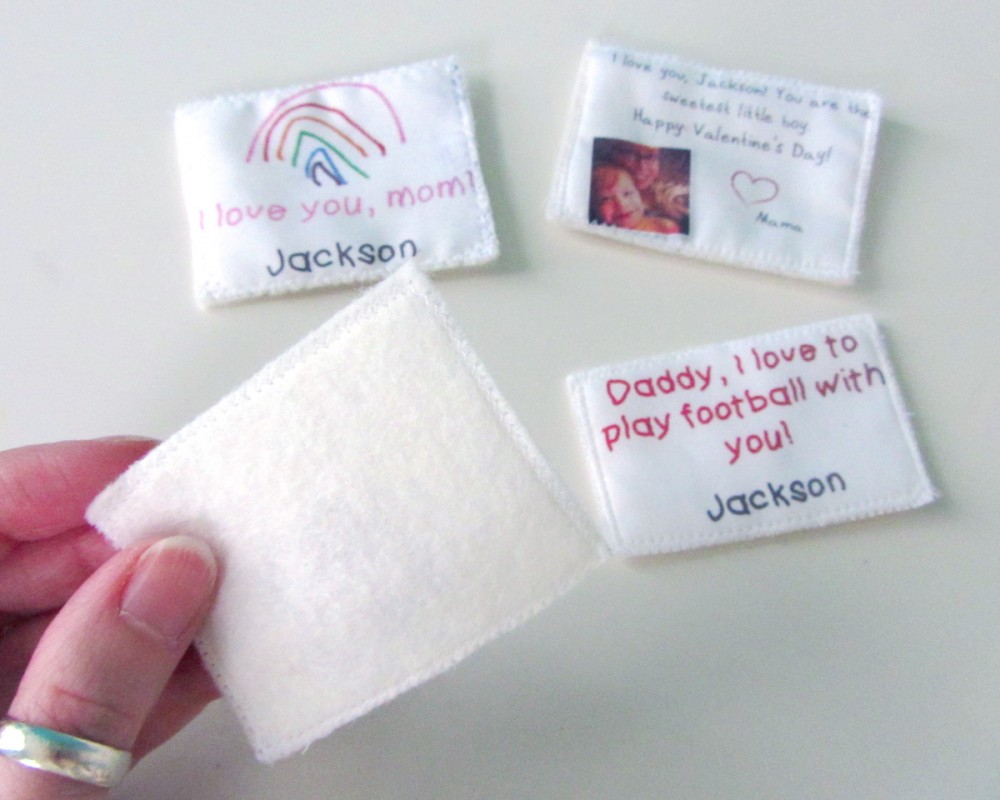 I cut out the printed fabric after peeling off the paper backing. I didn’t worry about the size except to make sure they fit in the envelopes. I zigzag stitched them to pieces of white felt.

Stamps: I didn’t follow a pattern for the stamps. I just sewed bits of felt and ribbon onto off-white felt (you could use white) then trimmed around the white edges with my pinking shears.

On the back sides, I sewed hook Velcro on. I sewed all the Velcro by hand in this project and it was the lamest part! My thumb was bruised the next day. 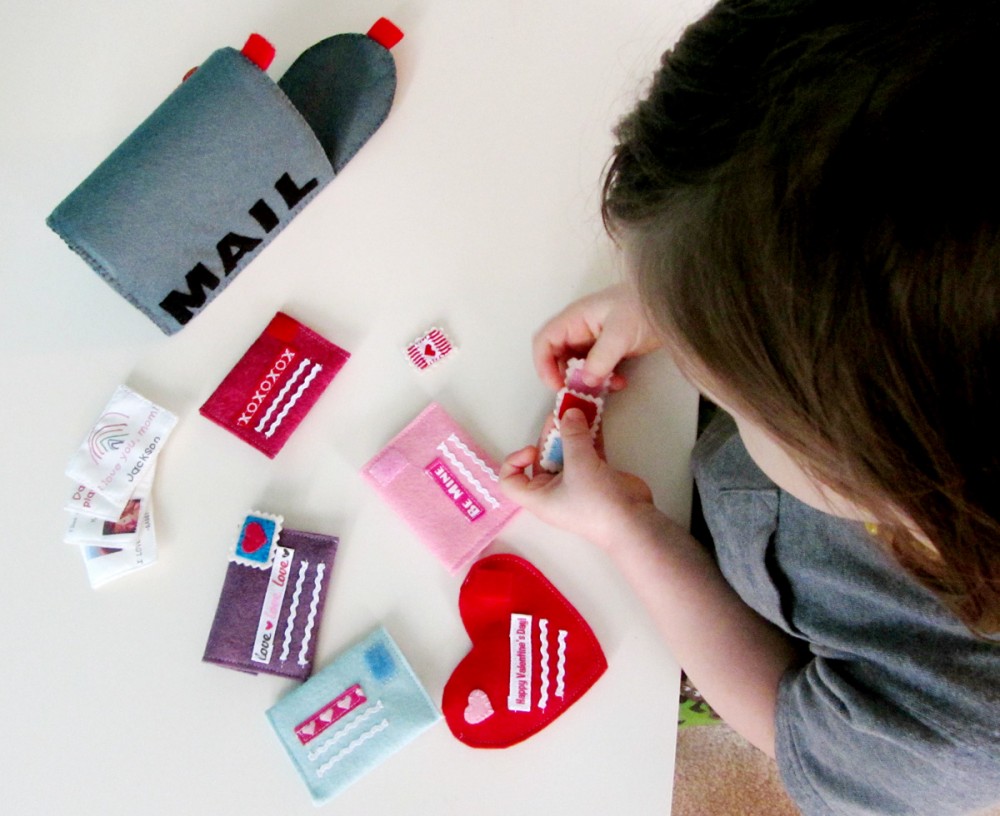 The set was a hit with Jax, though he is rather fond of pulling everything apart and just shoving all the pieces into the mailbox. We’ll play with it together so he can learn that letters go in the envelopes, stamps on the outside, then they get put in the mailbox. 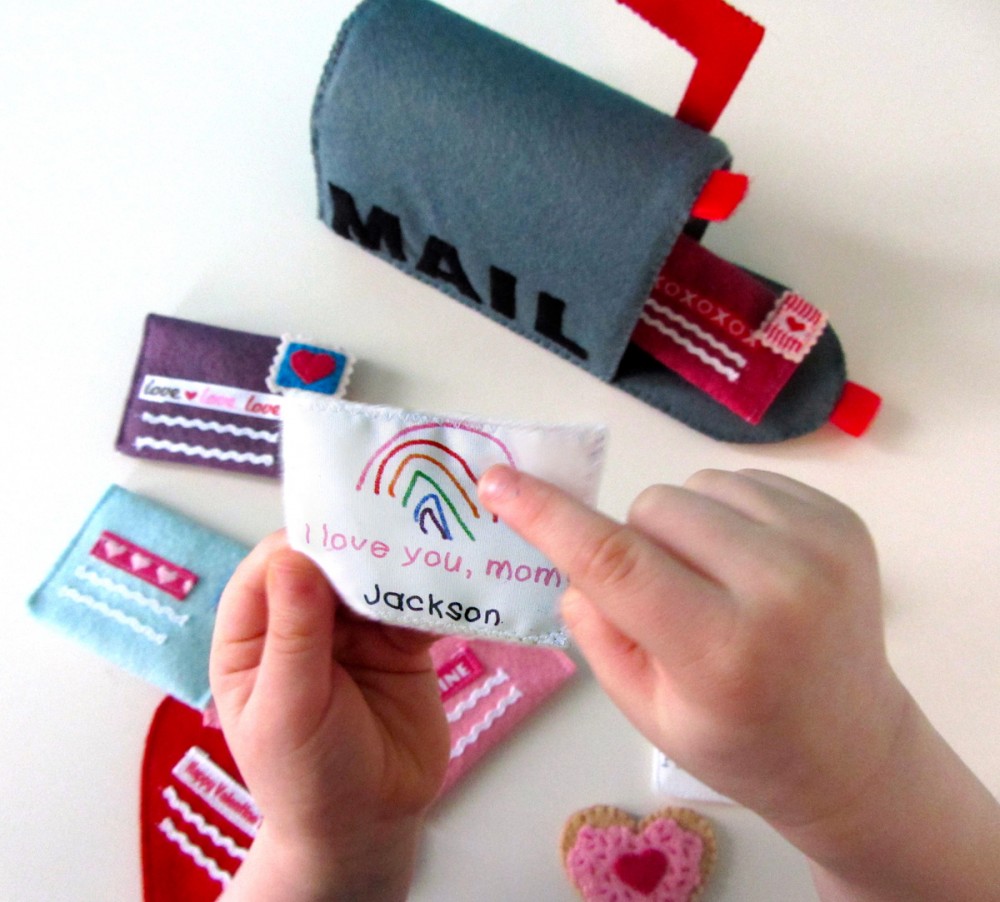 And he is SO proud to see his name and the rainbow he drew! 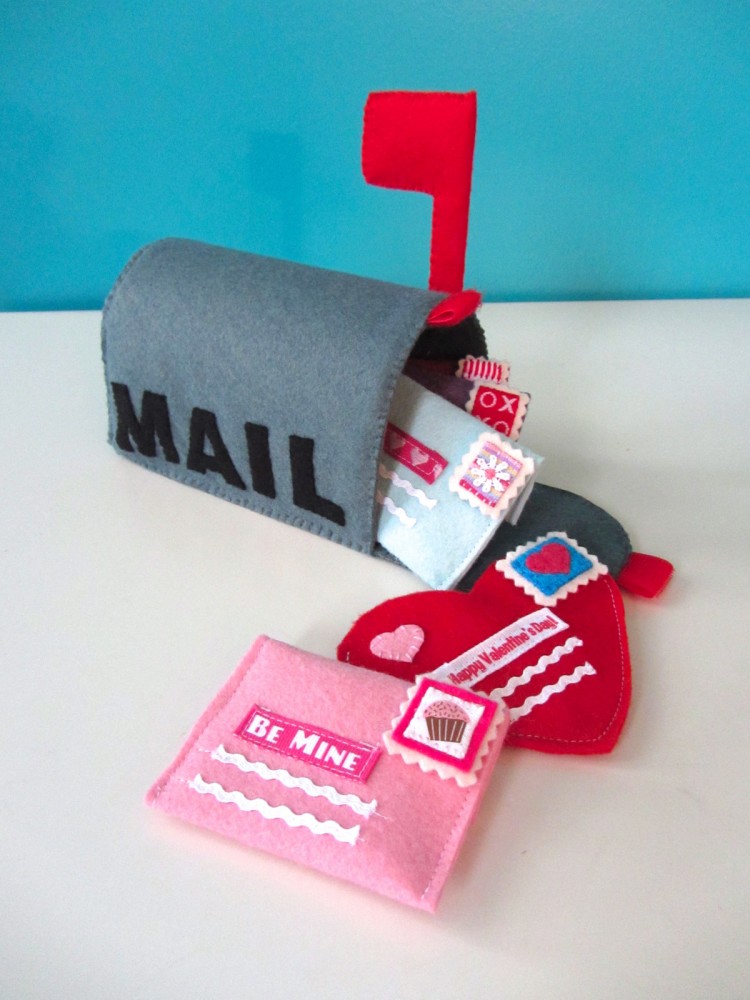 I hope you enjoy making this set for your little one! It has a lot of options for really customizing it and making it your own. If you make one, I’d love to see it! Email me photos or post them to our Facebook page. As always, I’ll be posting updates every day or two to the FB page with photos of my current projects. Next up: a bug themed party favor before returning to the fire station project! 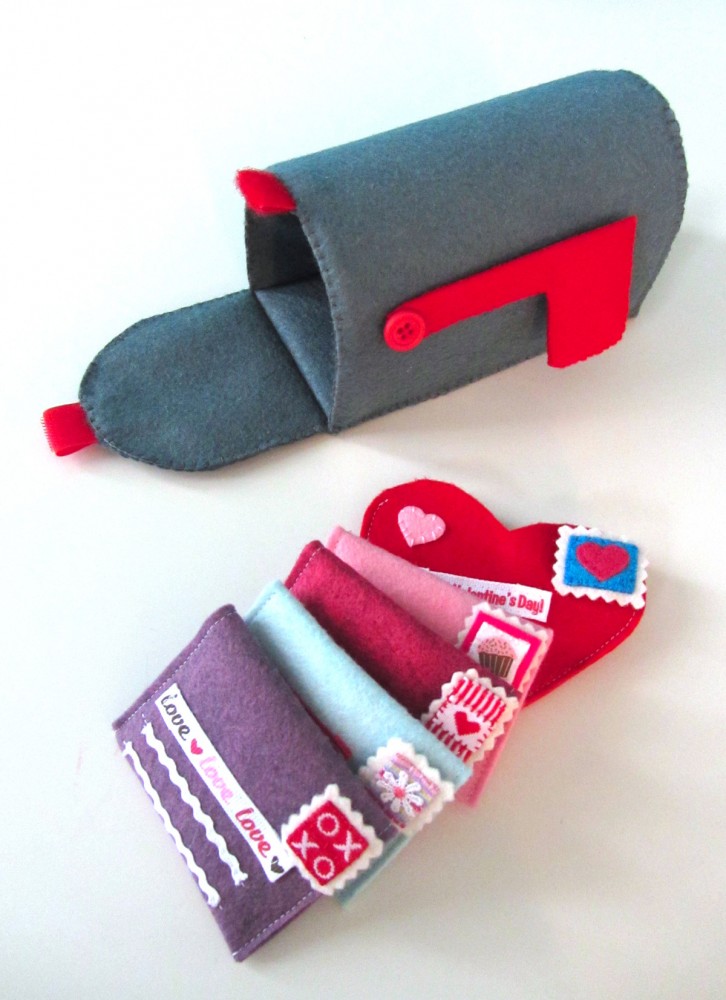