I’ve had this page started for quite a while, but other projects needed to be completed for me to stay on schedule with my sewing. I know a lot of you were waiting on this one – thanks for being patient!

My inspiration for this page came when I was contacted by Lots of Buttons and offered a $10 code to try their service. As soon as I saw some of their buttons I thought of planets! It took a lot of searching to find buttons that would work for each planet and were all about the same size. I was disappointed to find out may favorite button was sold out after placing my order, but their customer service was very helpful and offered a substitute. I ended up not using the replacement button, as it was a lot muddier looking in person, but I was very happy with the others. 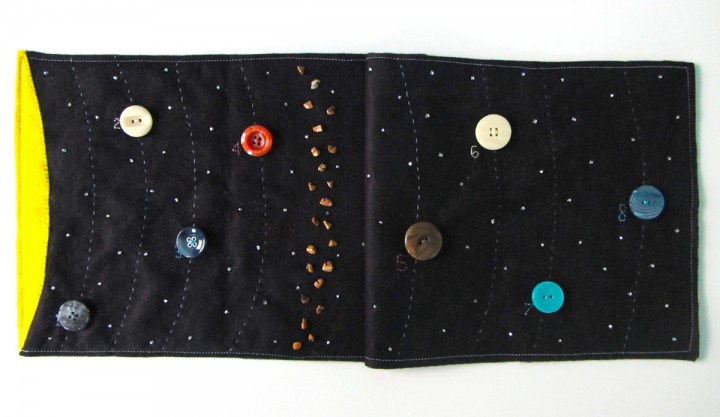 This page is mainly a learning page for Jax and I to use with our school studies, but it is also a little matching game with colors and numbers. The buttons that hold the planets in place match their colors. I also stitched numbers on the page and the planets. My planets are two layers with a button hole in the back layer. If you want to have the page be a buttoning exercise for your child, you could make the button holes go through both layers. You’ll lose some of the look of the planets and might need to use smaller buttons on some of them, though. (My cookie matching page is an example of this.) 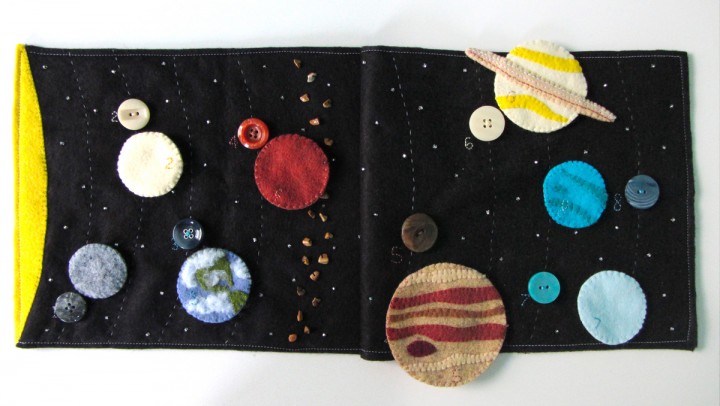 For those with little ones who like to put things in their mouths – I did use beads. Jax is really good about things like that at this point. I always stitch through every bead two times for strength, but you can use some alternatives if they make you wary. Try cutting tiny felt scraps to sew on as the asteroids in the belt. Little * stitches would make cute stars.

I was able to use up a lot my scraps of felt from American Felt and Craft. The earthiness of the wool blend felt works so well for the planets. 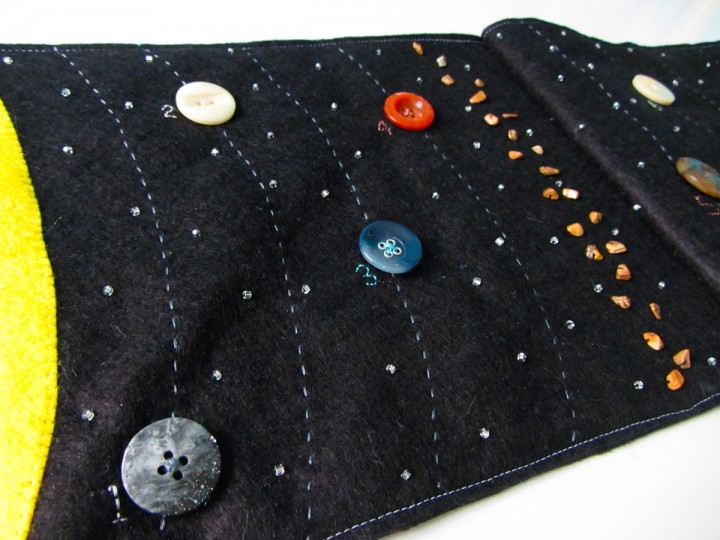 I started on the left hand side of the spread by sewing down the sun. I stitched the orbit lines one at a time while sewing the corresponding planet, so I could be sure there was enough space between each one. The orbit lines are gray thread in a dashed running stitch. The buttons were each sewn down with matching thread, and I used the leftover thread to stitch the number along side. I did them freehand in back stitch.

In between the orbit lines, I stitched on seed bead stars. I actually just did a vertical zigzag between each and that gave me a random-looking, but evenly spread star scape. After Mars, I stitched the asteroid belt using the same stone chip beads I used as nuts on my sundae page. 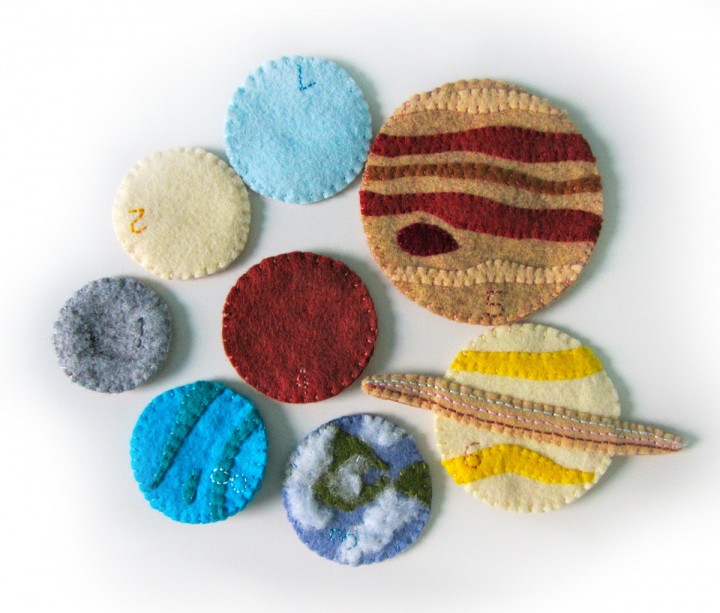 For each planet, I stitched all the details and a number on to the front piece. On the back piece, I cut a slit large enough for the button. I then did a blanket stitch around the slit to fortify the edges. 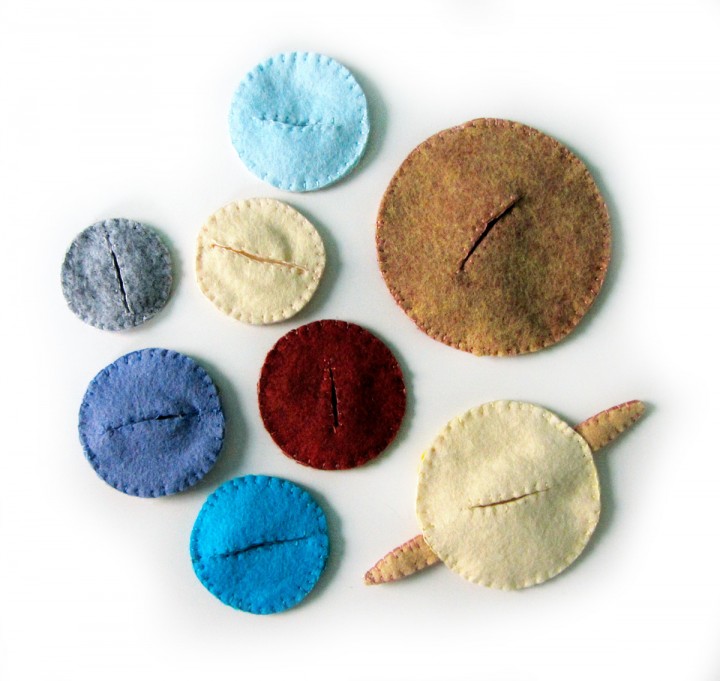 Planets: For Mercury, Venus, Mars and Uranus, I only stitched the number on the front before  making the button hole and sewing the fronts and backs together.

Sorry, Pluto… You were demoted and I’m out of room!

Earth: I started by sewing down the land mass shape. Then I took a very thin layer of batting that I had peeled apart, and ripped it into cloud shapes. I used white thread and stitched it down, then added a number 3 in blue thread. I added a button hole to the back, then stitched the front and back together. 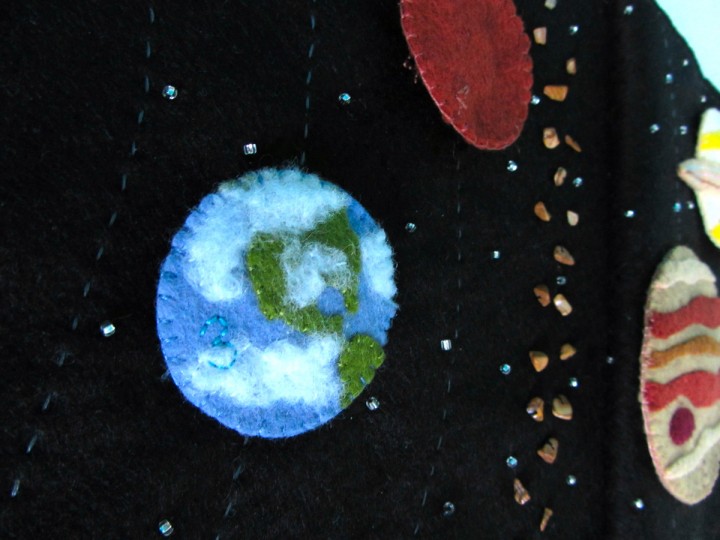 Jupiter: Jupiter has various stripes sewn on, as well as the red spot. I sewed a 5 on it in brown thread. I added a button hole to the back and sewed the two sides together. 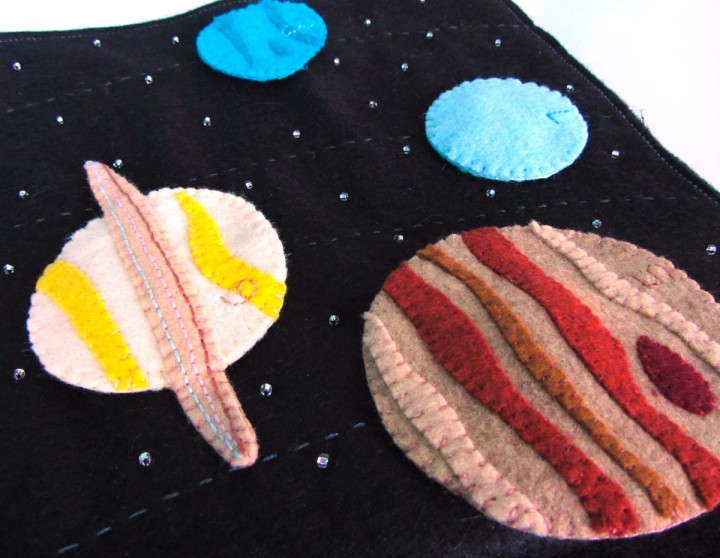 Saturn: I started by stitching the two yellow stripes onto the planet front. Then I stitched some lines on to the front ring piece using back stitch in pale blue, pale pink and brown. I layered the front planet piece in between the front and back ring pieces and sewed all the way around the ring. I sewed the number 6 on in tan. I then added the button hole to the back and stitched it to the front. The back ring piece is mostly hidden inside the planet and adds stability.

Neptune: Neptune was simple with some swirls and a number 8 decorating the front before I added the button hole and sewed the two sides together. 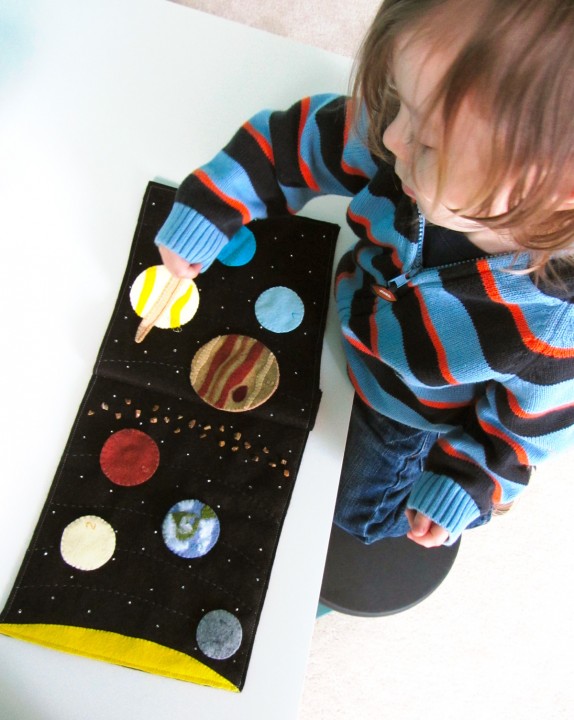 I think this is the page that Jax has asked “Is it ready yet??” the most of all the ones he’s seen me sewing. He keeps calling the planets “moons” so his interest is a good opportunity to introduce him to astronomy. I’m going to look into some handouts and worksheets we can do together to start going over the planet names. Perhaps a nice 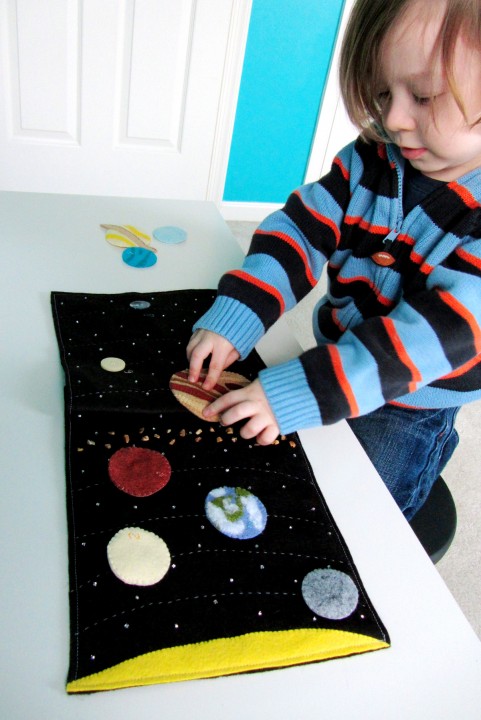 I hope you enjoy this free pattern! I’d love to see your finish version. Email me a photo or post it to our Facebook page.