If you haven’t been introduced to our Montessori wall map and quiet book yet, you can read all about it here. This post is for the fastest continent to sew for – Antarctica! Every continent (and the oceans) will have landmarks and animals. Some, like Europe, have more landmarks than animals. Antarctica just has two animals featured, as there are mainly just seals, penguins and other birds.

Antarctica was a bit different than the rest in another way: it is the only continent that is hugely affected by the map projection. On the wall map, it is shown as a long, unraveled strip at the bottom. So Antarctica is sewn to the map, but I also made a piece in its actual shape that Jax can compare to it or to his globe

A quick note: Do you have a website that fits in with our readers’ interests: sewing, felt, homeschool or Montessori? I am trying out a new sponsor banner system and I have my 125×125 spots open for free swaps! There are currently 5 spots left, so please visit the Sponsor page to read more! Check it out to the left! Thank you for the help! 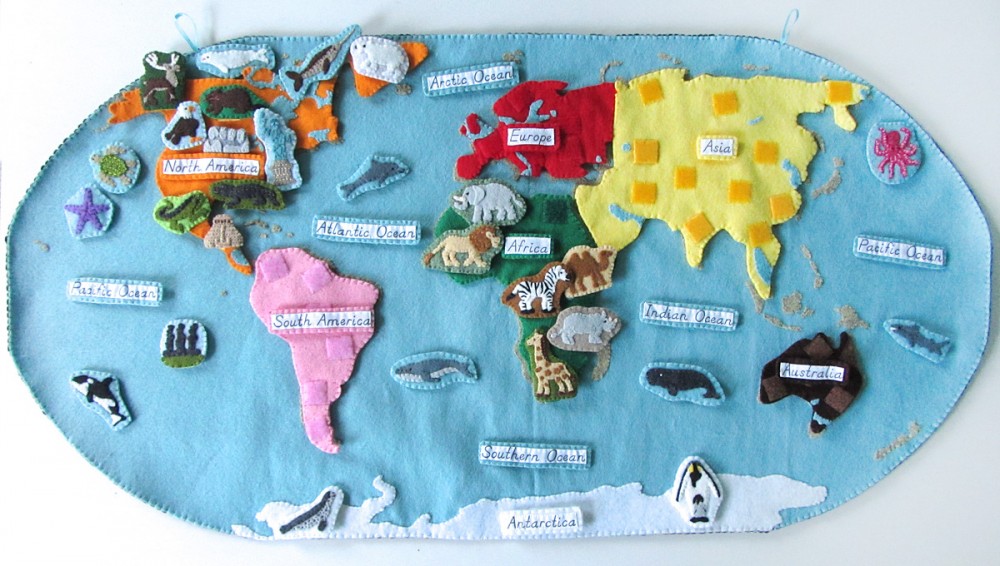 My pyramids are still missing… Time to sew a new one!

Those of you who follow along on Facebook or Instagram might have seen there was a bit of a mishap in Antarctica. Well, the Antarctica in our house, at least. Our golden retriever got a little too excited about my penguin and ate him! Since I had to sew him a second time, I made him even cuter. He now is a daddy penguin with a little chick!

Regardless of that excitement, I still love working on this project! This will be an amazing resource for Jax throughout his school years. Yes, I am giving you all my patterns and printables for free! If you’d like to contribute, visit my support page. School items off of Jax’s Amazon wishlist always help! Especially because our heating/cooling unit just just freaked out and flooded our basement. We are now $6k poorer, despite insurance help. Yikes. I am currently saving up Amazon credit for the handbells on his wishlist. If I can get those, I’ll share a music unit with you all! but it looks like I won’t have enough until the end of September. 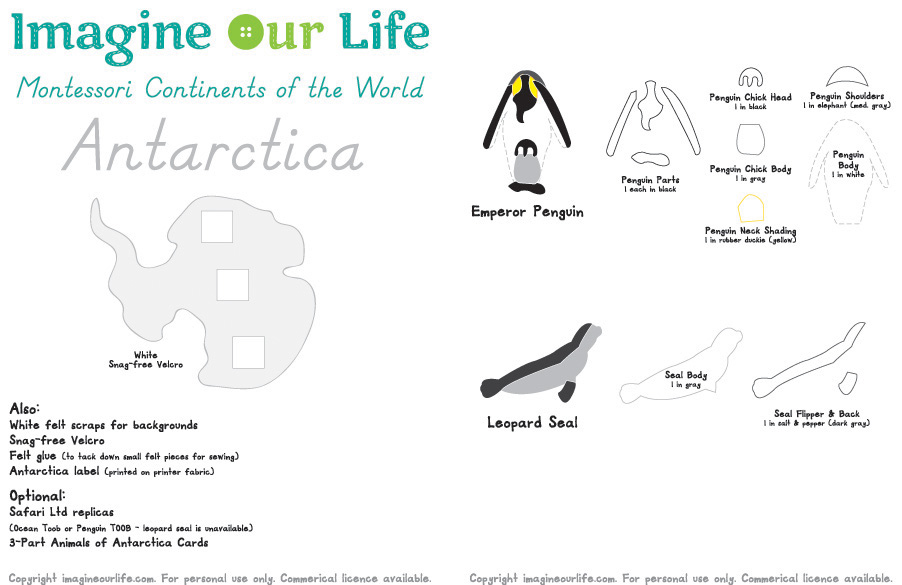 on the backs of all these pieces and on the Antarctica puzzle piece. 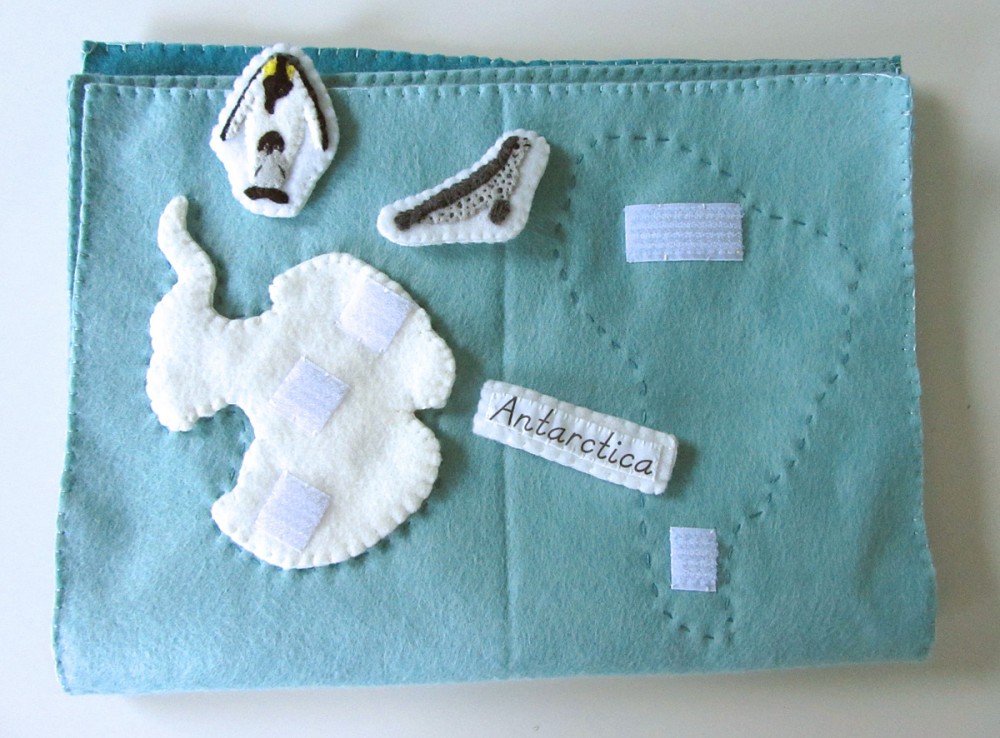 Shown here on the quietbook page that Antarctica will share with South America.

Label: (Felt used: white) For the continent label, I folded under the edges (just a tiny bit to hide the rough edges) and creased it with my nails. The printer fabric held the folds nicely without ironing. Then I stitched the label to some white felt and trimmed it down to be a border. I cut a matching felt rectangle for the back, sewed snag-free Velcro to it and then sewed both sides together.

For all of the animals, I started by gluing the pieces down to a scrap of background felt with a very light amount of felt glue. I glue multiple animals at a time to give them time to dry. I sewed them down, trimmed the background and cut a matching backing piece. I sewed snag-free Velcro to the back and sewed both sides together with a blanket stitch.

I sewed down all the edges with matching thread. For the baby, I sewed two long, dark gray stitches for wing flaps. I made French knot eyes then highlighted them with a ring of white stitches. The daddy penguin got a dark gray French knot eye. 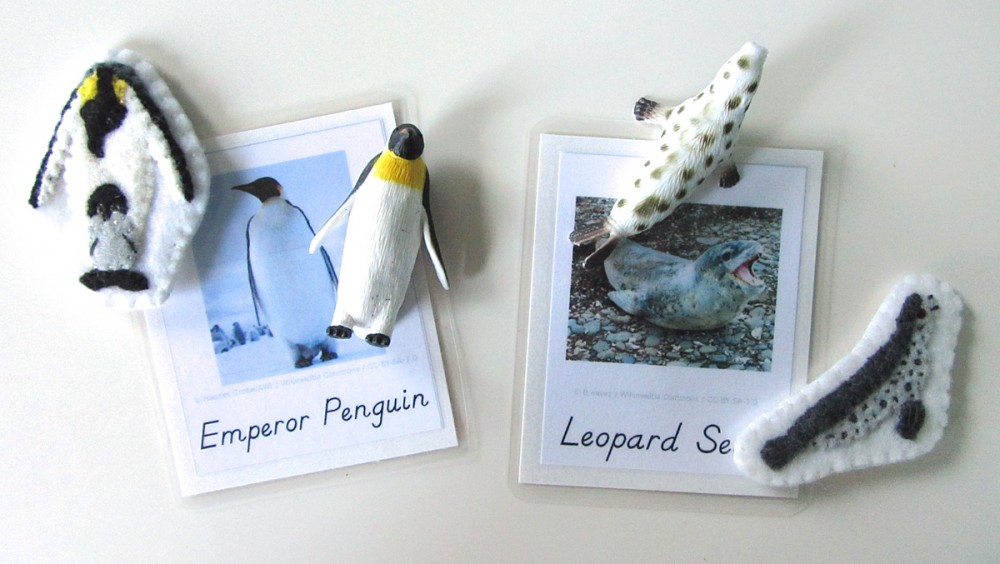 Leopard Seal: (Felt used: white for the background, salt & pepper dark gray for the back and flipper, and gray for the body) I first glued the gray body down, then added the darker back and flipper. To make the spots, I just made lots of little stitches. The tiny spots are just one stitch. The larger ones are a few stitches side-by-side. She has a French knot eye, a little stitch nose and a longer stitch mouth. On the tail and flipper, I made long dark gray parallel stitches. 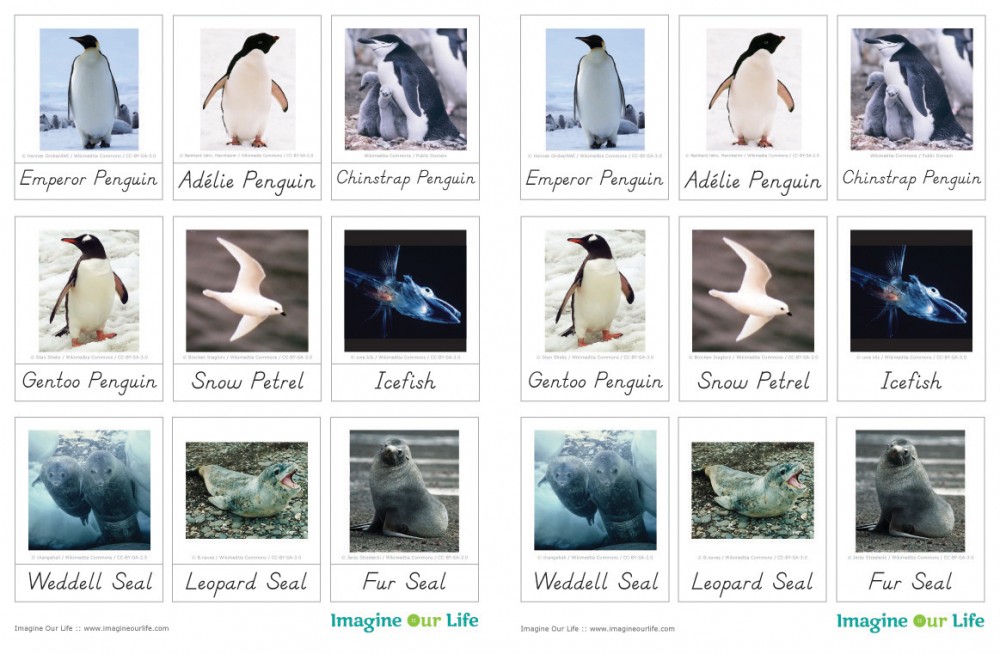 Jax is still focusing on his world continent unit with the world continent 3-part cards I made up for him. We are using our Montessori globe and singing the continent song I made up. So far, He can point out the continents I ask for, and he can usually tell me the names of Africa ans Antarctica without prompting. We’ve also started using the ocean cards a lot. For the animals, we haven’t done a lot of formal lessons yet. We will when we focus on a continent. For now, we pull out our SafariLTD’s TOOB figurines and use out 3-part cards to match them whenever he shows interest. We like to watch short videos about an animal, then study some pictures and draw our own. 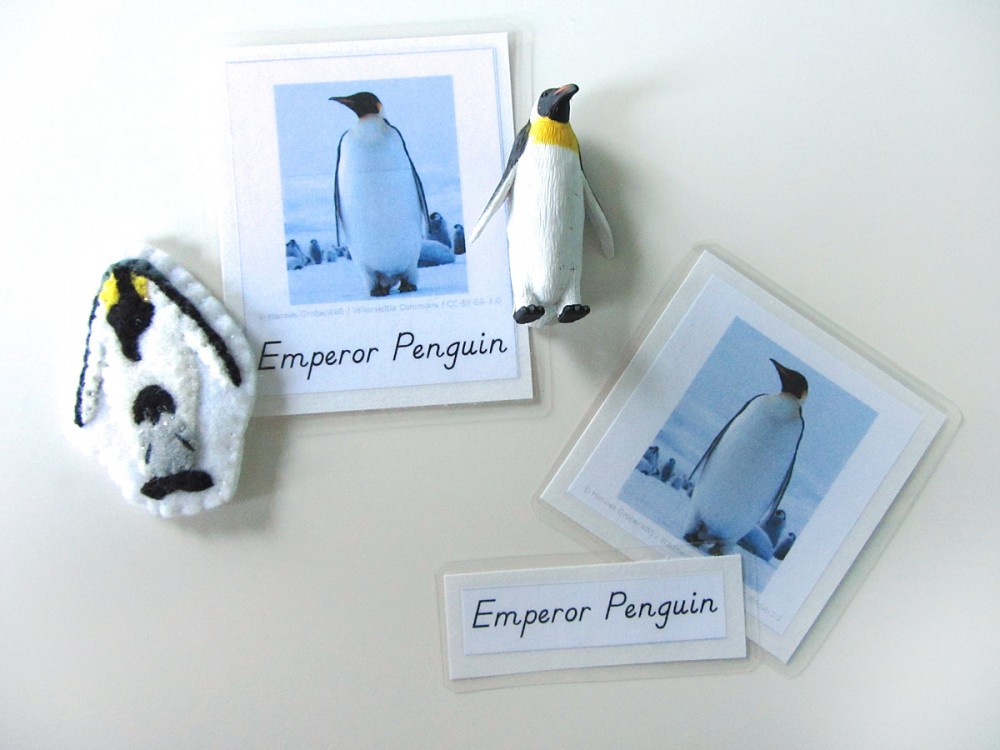 These Antarctica cards don’t really have a good match in figurines. I would LOVE if SafariLTD would create continent-themed TOOBs! (Contact them if you are interested too!) You can match the Penguins Toob

to their penguins. They don’t have any antarctic seals. Mine is from the craft store where they sell diorama supplies. I mention it in more detail in my ocean homeschool post.

Click here to download my free pdf file to make your own. To make mine, I cut them out, glued them to white construction paper (to match Antarctica’s Montessori color) then laminated them. I love my new laminator

! It makes everything so shiny and strong! 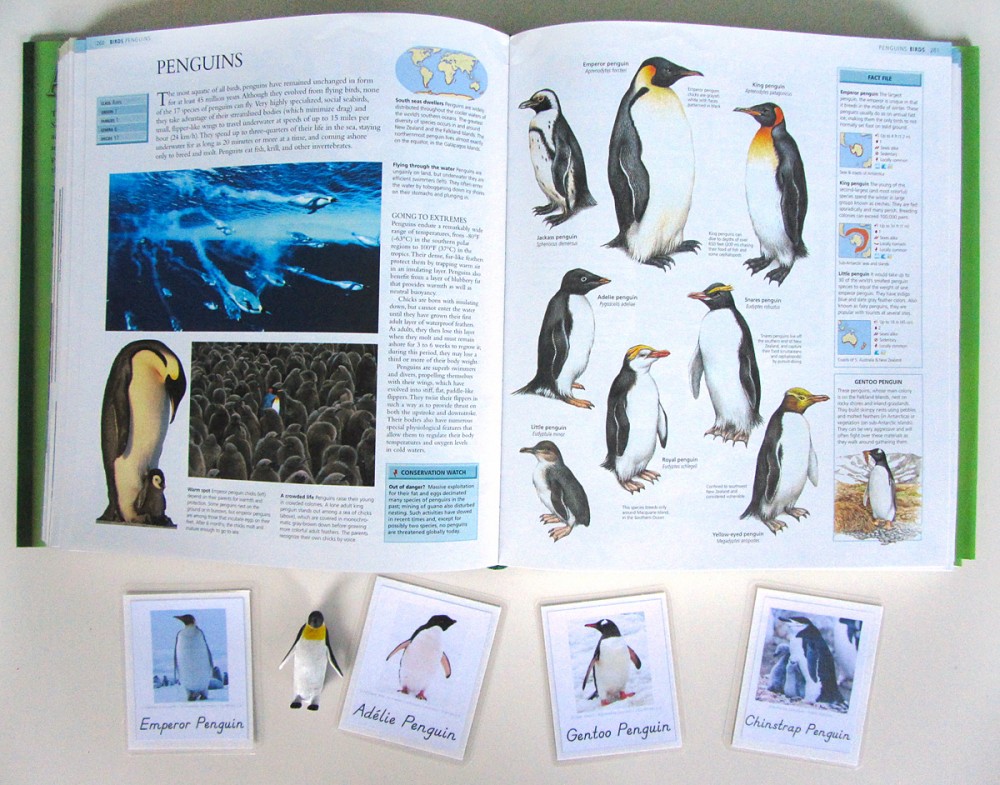 One thing that came of our basement flood – I had to move all our books out of the bookshelves and I found my The Encyclopedia of Animals: A Complete Visual Guide 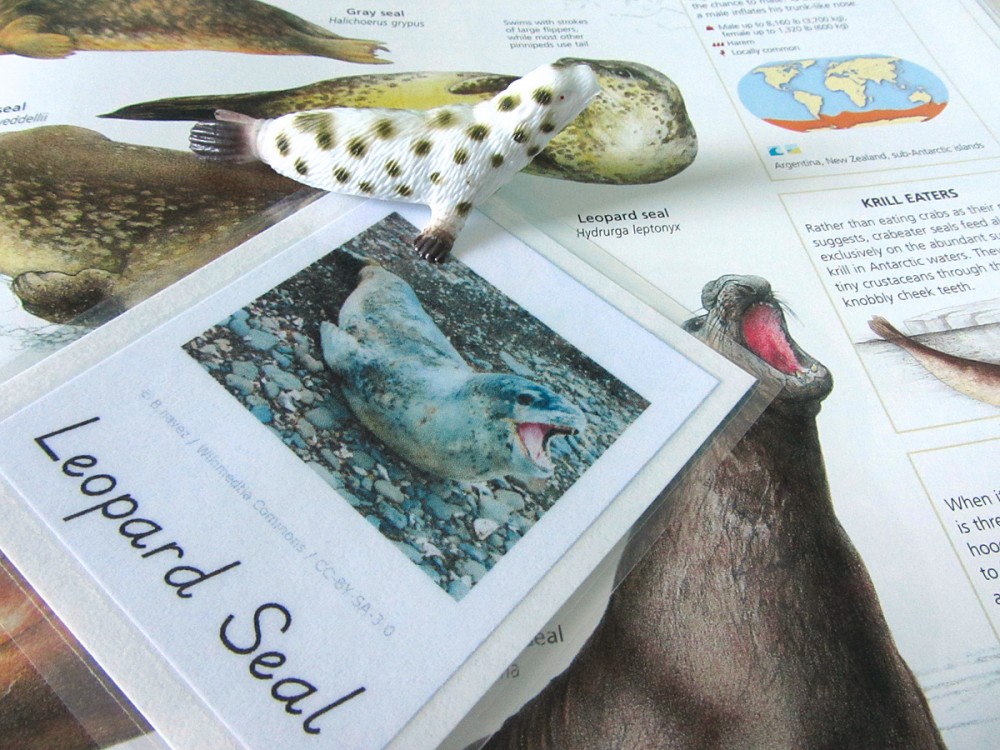 It has a lot of beautiful photos and useful facts about many different animals. Jax and I will be using it to match up with our 3-part cards and read more about the animals. 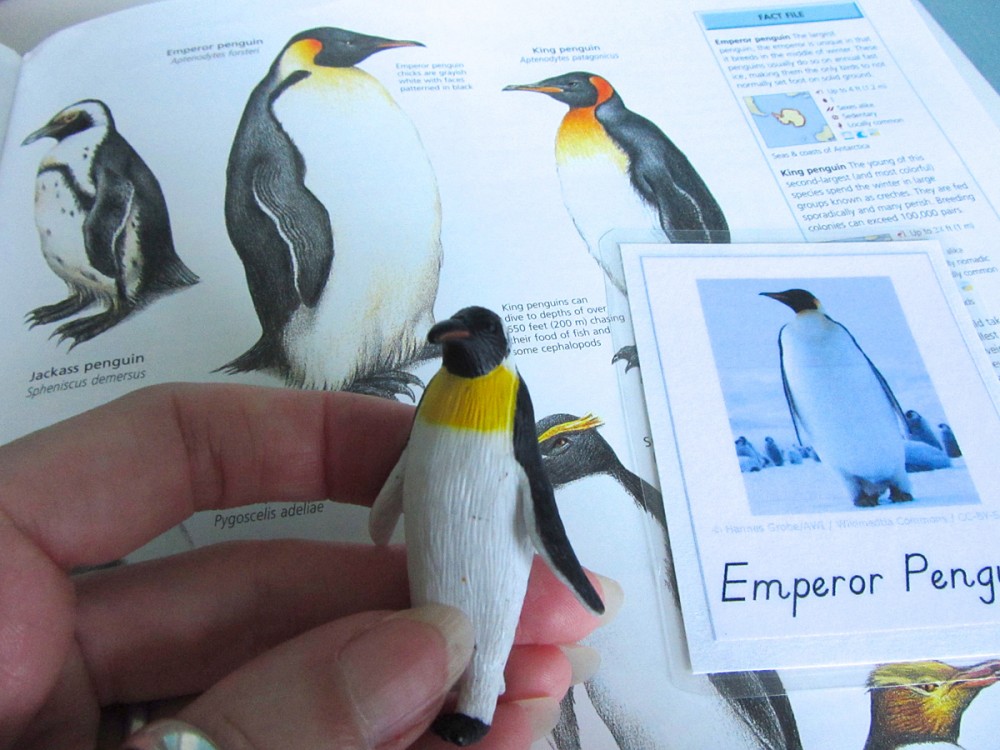 I didn’t notice until after I took these pictures that there is a penguin called a “jackass penguin“. Oh my! Poor little penguins! 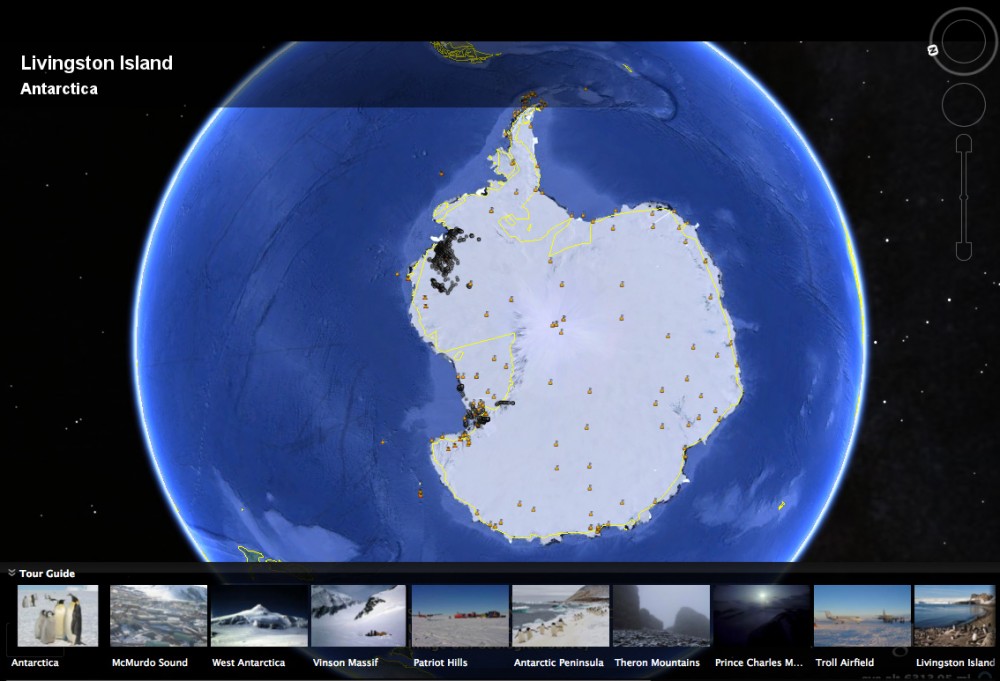 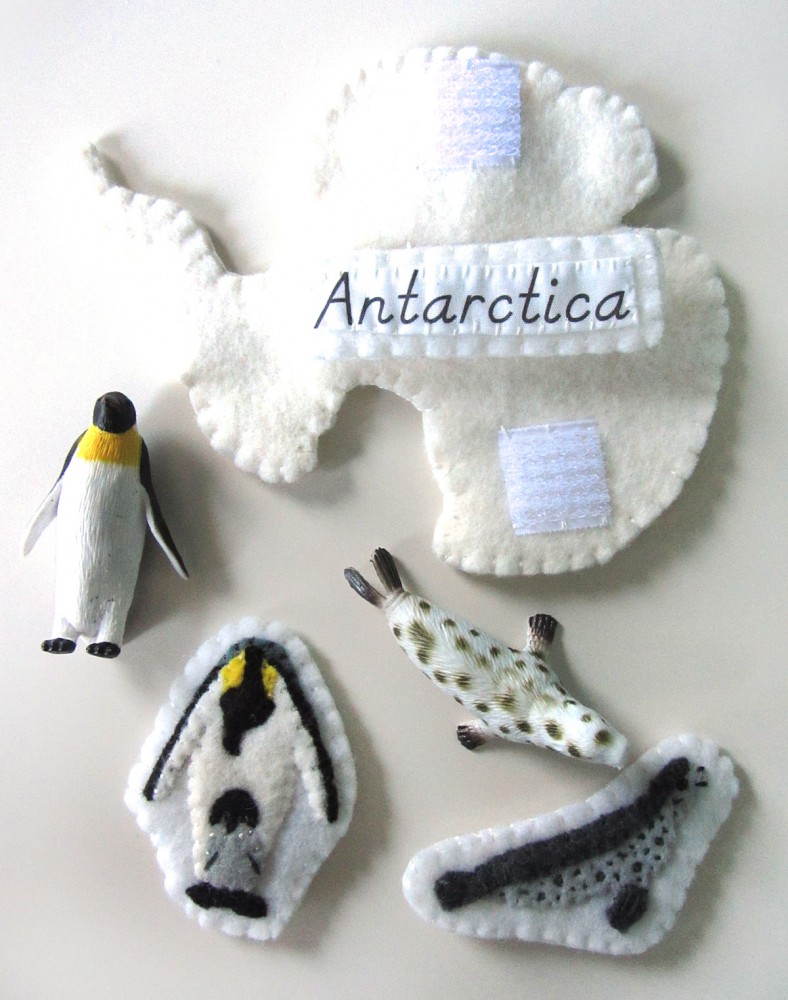 I hope you are enjoying this project as much as I am! I’ve gotten see the maps a few of you have started! If you are sewing along, stop by my Instagram @iolstephanie and leave a comment on one of my photos (I can’t see your photo if it you are private, but I can request to follow you temporarily if you leave a comment about it) or share photos on Facebook. You can also email me.

It’s not even slightly Montessori Monday still, but I hope you’ll check out the other great links!