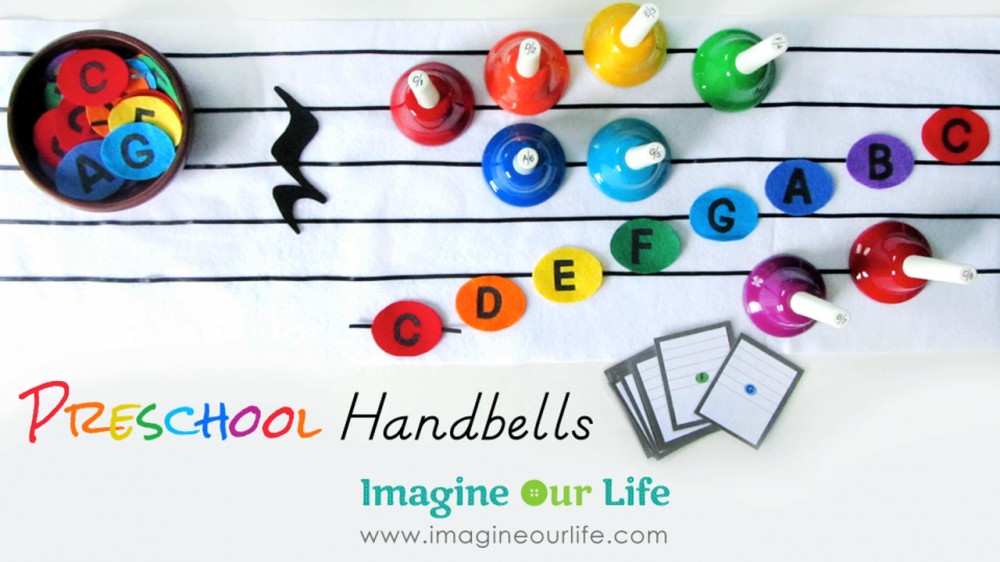 Jax loves music. He LOVES it. If any song comes on, whether he’s heard it before or not, he is singing along. I’ve been collecting musical instruments for him, mainly from the thrift store. He loves to ask me to put music on for him while he “plays” along on his guitar or drums.

Arts are important in our family. I grew up in music and art. I have a Bachelors in Art Studio. My husband played in bands growing up and deejay-ed for years. We definitely want Jax to have strong roots in the arts from an early age. 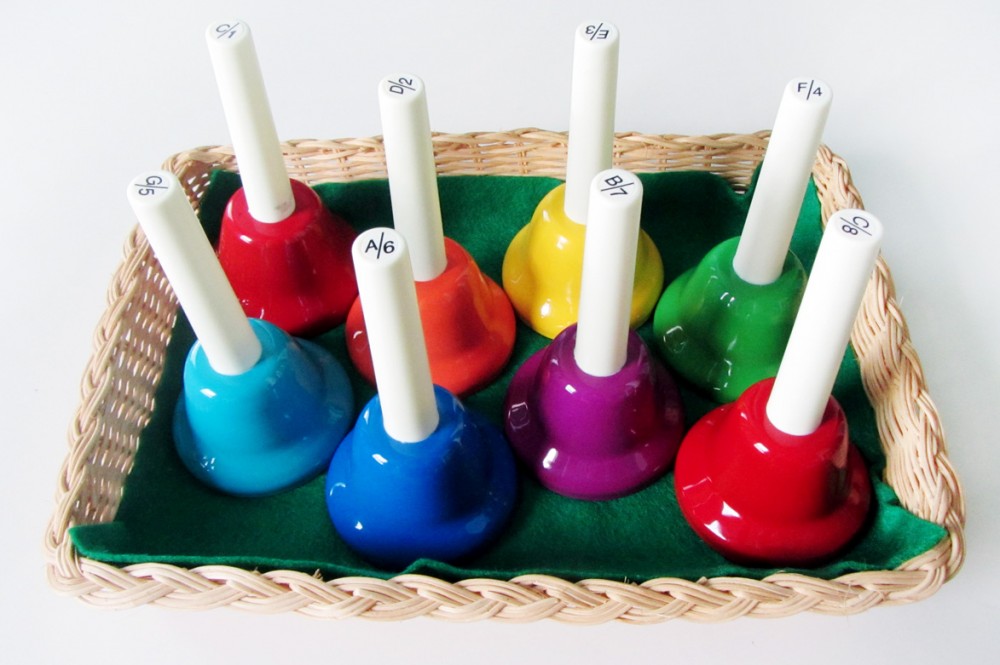 Since Jax is only 3.5 years old, I needed to think of both his manual dexterity and his emotional maturity right now when planning our music homeschool unit. I needed something that he could use easily so that the frustration of not being able to make a note correctly was not a concern. I chose handbells. They are available in color-coded educational sets aimed to help children learn which bell plays which note. Music + Rainbows? Jax’s idea of heaven!

There are other choices that still let you start with color-coded notes (just make sure you are happy with the colors the instrument uses!) like a xylophone 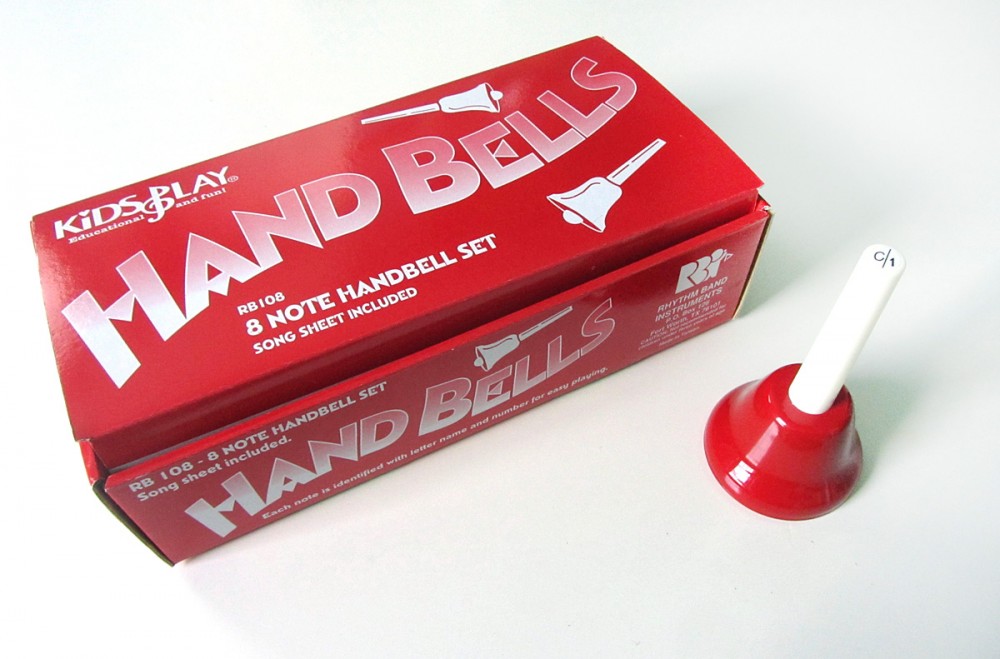 Thanks to my aunt, who values how dear music is to our family, Jax got his started handbell set. I chose the Kids Play Rhythm Band 8 Note Handbell Set

because add-on sets were available should we need them in the future. They also use fairly standard colors. 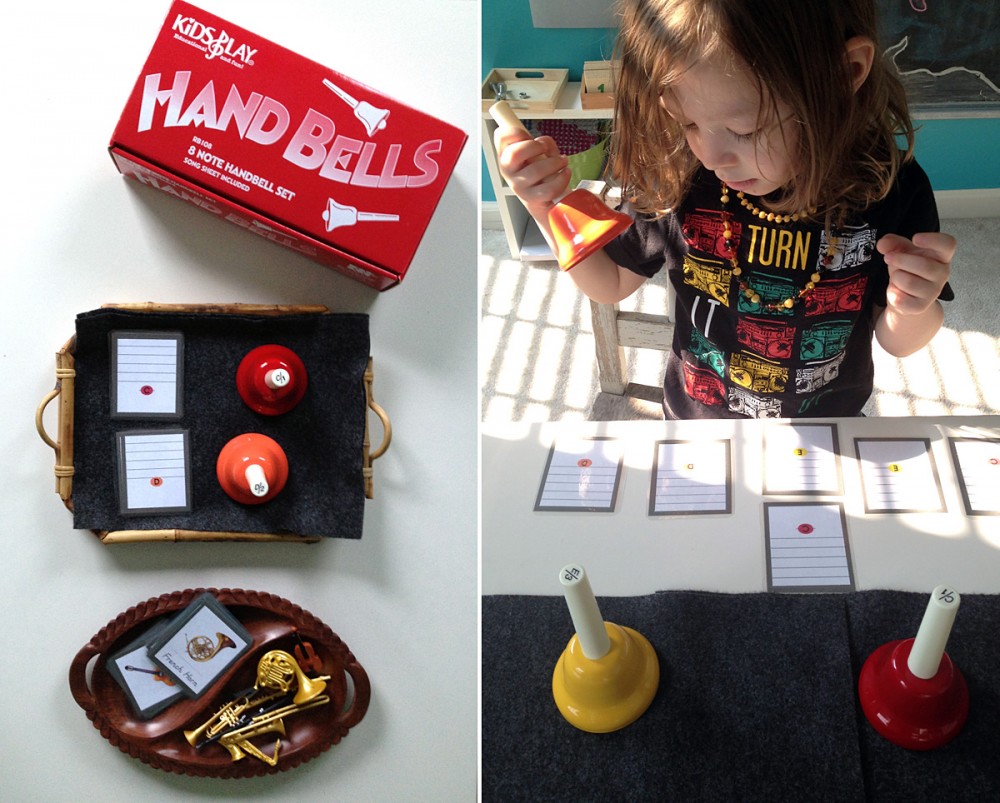 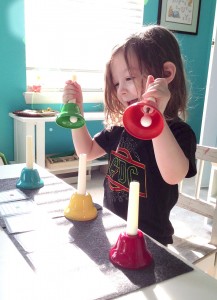 We started our music unit with some 3-part cards introducing musical instruments. Jax already recognized most of them, so it was mainly a review.

When our bells arrived, I started by presenting two bells on a tray with a mat and matching cards showing where each bell’s note is on the music staff. I showed him how the bells’ colors and letters match the cards, then we practiced sounding the bells and switching between the two notes. We moved on to playing the note on the card I held up. He had no problems, so I let him have a third bell. With all three matching note cards, we made patterns to play.

We continued on this way, earning a new bell about once a week. It took us about 2 months to work up to the full set of 8 bells. (He actually earned the last one the day we took photos.) I always include a rolled up felt mat on the handbell tray. Jax knows we have to unroll it and place it on the table for the bells. When playing the handbells, setting them on the mat dampens (cuts off) the ring. We started with two sheets of felt, but now use a long strip the width of our table.

There are a lot of ways your child can explore music and sound with handbells. Some of the things we’ve done are: 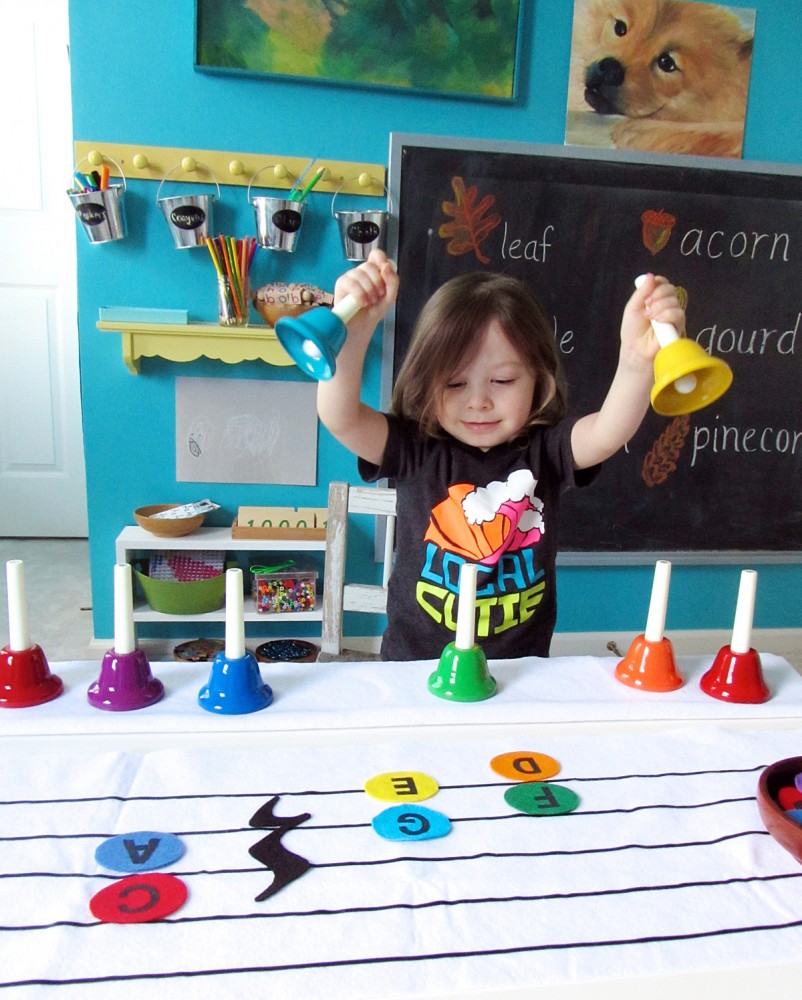 • I showed him that he could play two bells at once. We noted that it doesn’t sound good to play two bells that are next to each other at the same time. The discordance was obvious to him, but he hasn’t quite connected yet that skipping a bell when playing two at once sounds better. This is something I encourage him to explore. 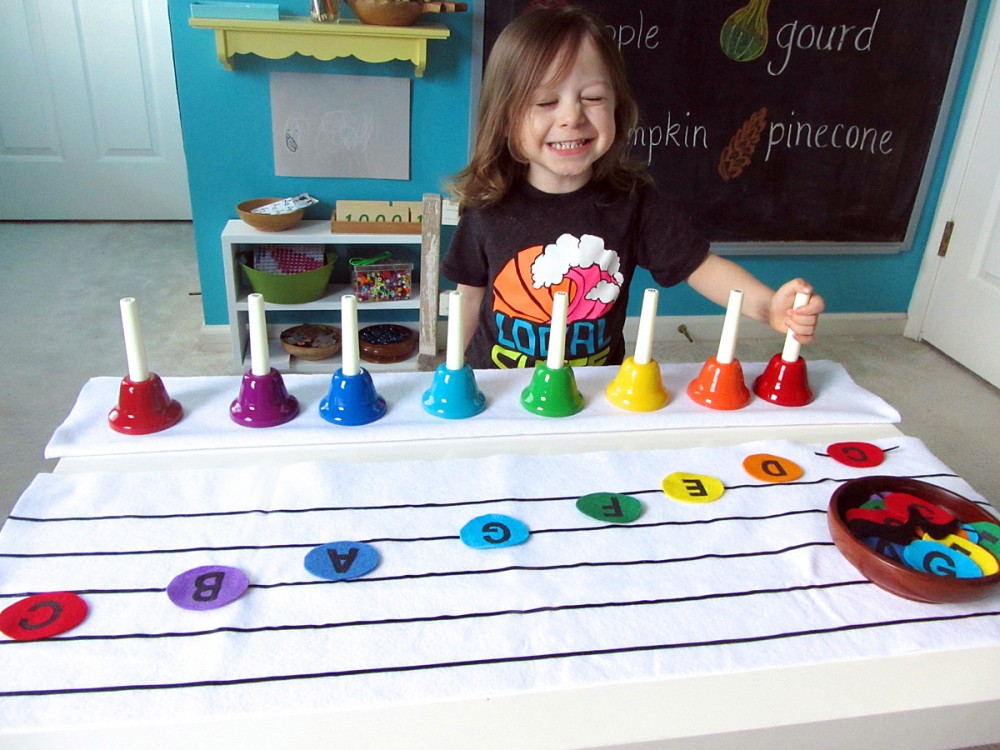 • We play find the bell – I ask him for a certain color/number/letter note and he plays it. When I ask for the lower C bell, I call it “middle C” (named for its position on a piano. The higher C is our newest bell, and I will be calling it “treble C”. You can also hold up the musical note cards and have them play the right bell. 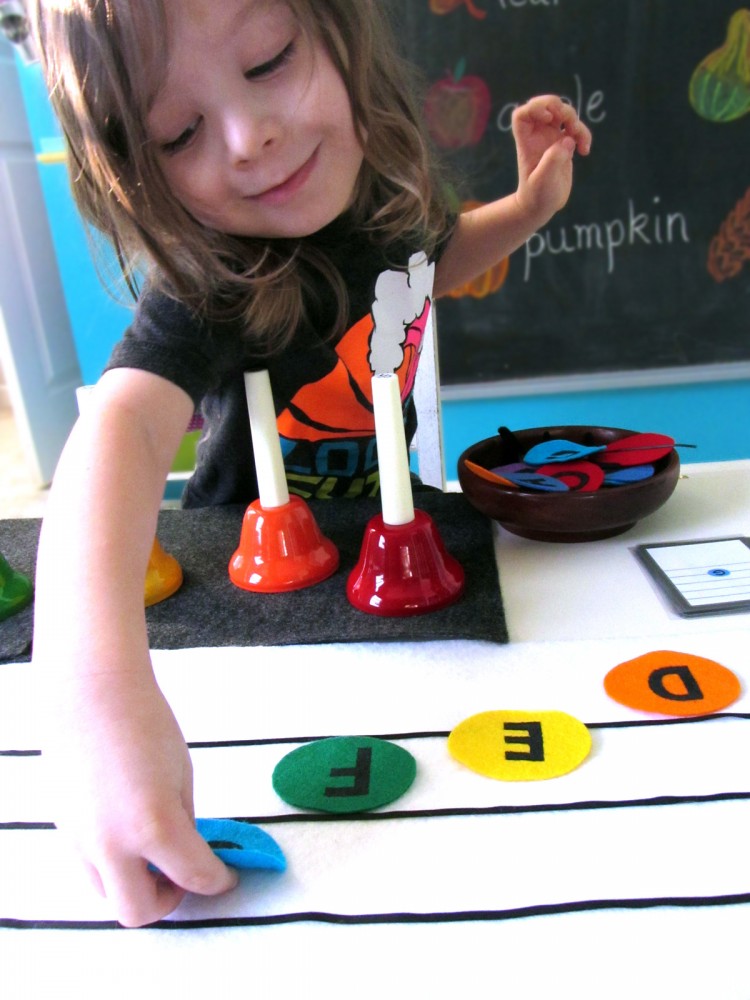 • Composing music can be done by preschoolers! Taking a cue from Montessori’s moveable alphabet, you can have the notes ready for your child to place on the music staff. Using control cards to help them place them on the correct line, they can arrange some notes and play their composition. My music notes are made of felt and involved no sewing for once! 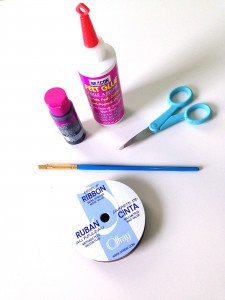 Start by cutting out your ovals. You need 8 red and 4 each of orange, yellow, green, aqua, indigo and violet. Using the narrow part of your paintbrush, sketch your letter onto the oval with fabric paint. By starting thin, you can adjust the size of your final letter: if you drew it too small, paint the final thick lines towards the outside of your sketch. If you drew it too big, paint the final lines towards the inside. I used the full width of my size 8 flat brush to make the final painted letters. This kept the lines a consistent width. 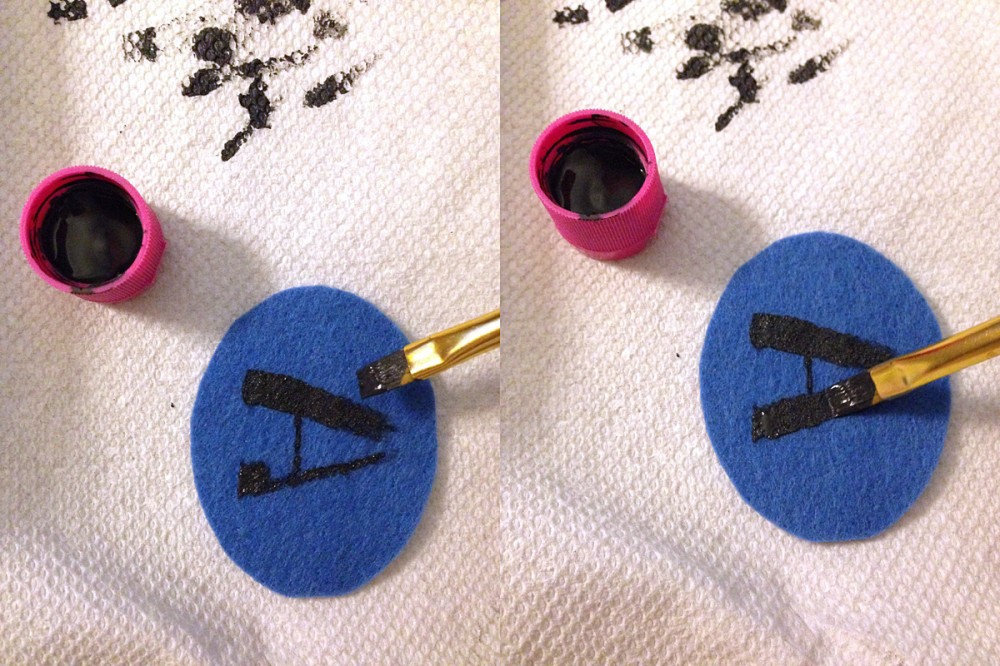 Take 4 of your red C’s and cut strips of black ribbon an inch wider than the oval. Coat the entire top of the ribbons trip with felt glue (including the raw edges to keep them from fraying.) Center the oval on top, press it down and allow it to dry. This adds ledger lines to the middle C’s that go below the staff. 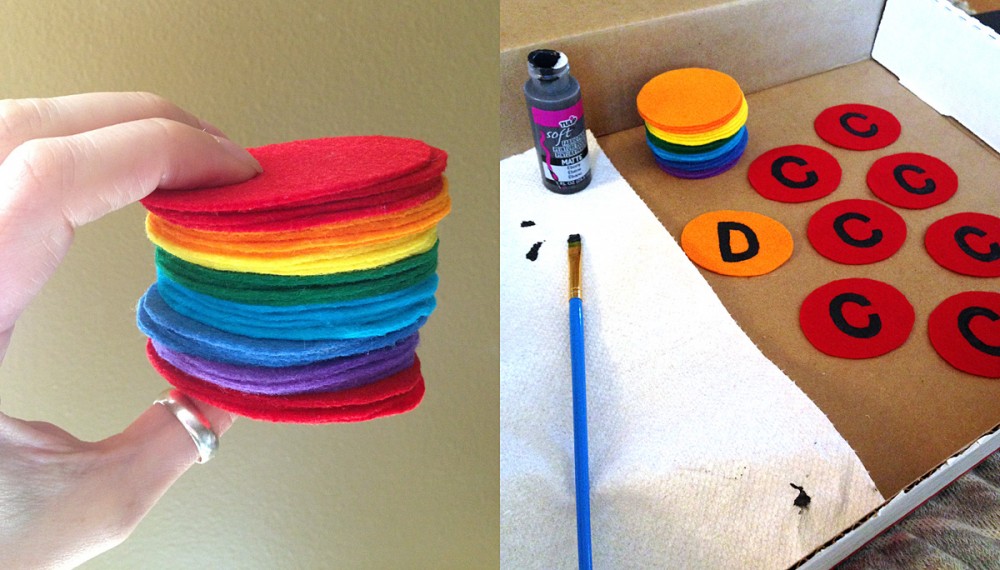 Cut out as many rests as you’d like. I have two quarter rests for now. I’ve included the rectangle needed to make half and whole rests.

To make the staff, cut a 12″ strip out of your 36″ wide felt. You can adjust the width to suit your needs. 36″ is the width of our school table. You could even use the full 36″ x 36″ felt piece and make 3 rows of staff lines if you have room to lay or hang something that large. Using the spacing guide, glue 5 strips of ribbon down to the felt and allow it to dry before use. make sure you allow enough room at the bottom for middle C’s ledger line to be properly spaced. 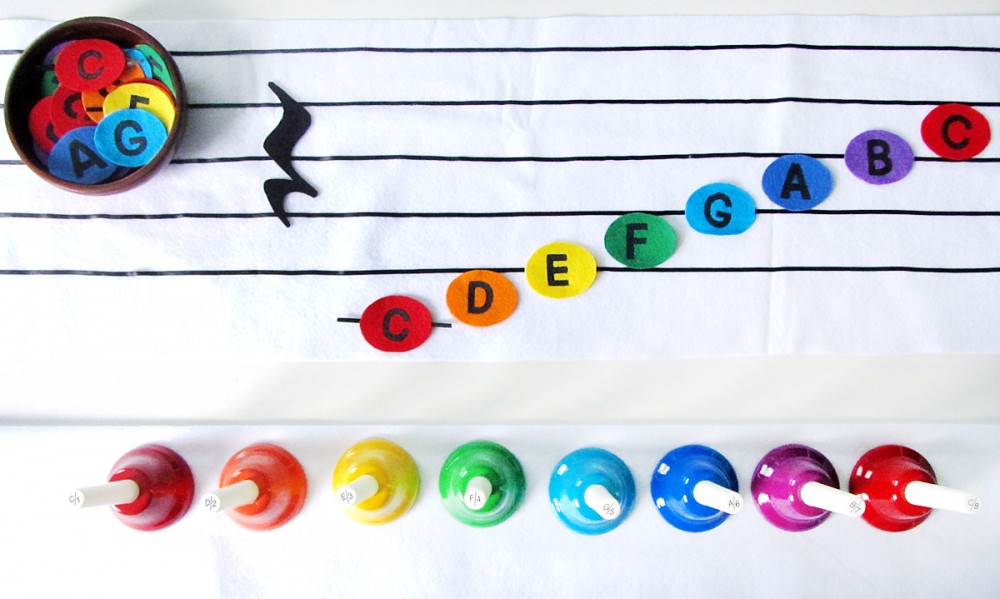 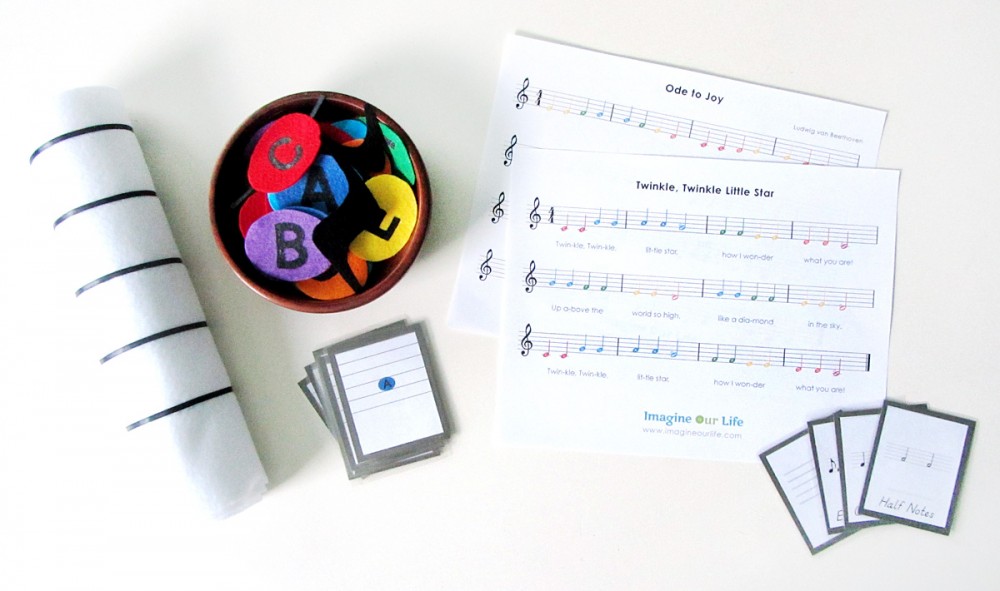 I have a lot of printables for this unit – many I haven’t even started using yet. Before I use them, each printable will get laminated

. I also like to mount my 3-part cards to colored paper or card stock prior to laminating. 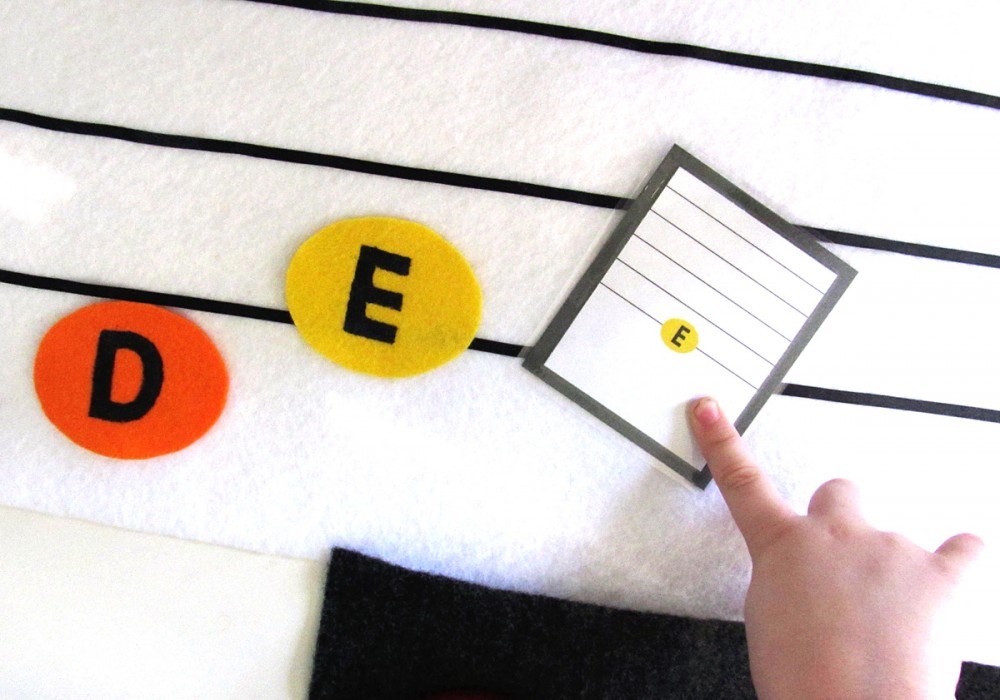 These cards show the position of each of the notes used in the 8 note handbell set. They are color coded to match the bells. Later I will make a new set that do not have color. Grab the free printable here. (This file was updated on 01/16/14 to fix the wrongly-positioned B. You can also get a page with just the fixed B cards here.)

This is a set of Montessori-style 3-part cards that cover basic music symbols. So far I’ve only given him a few of the cards to start getting used to seeing. You can download the free printable here. 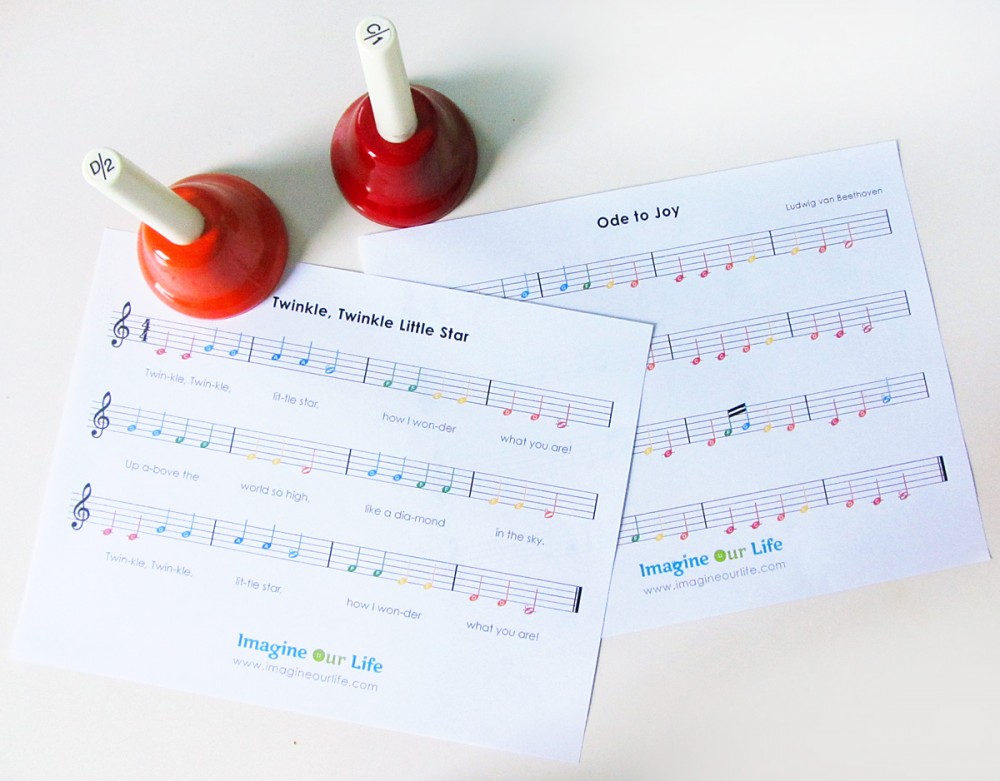 I wrote up the music to two fairly easy songs that can be played with the first 6 notes in the handbell set. For now, I play them for him and we use them as reference to set up his felt staff so Jax can play small excerpts. You can grab the song sheets here. 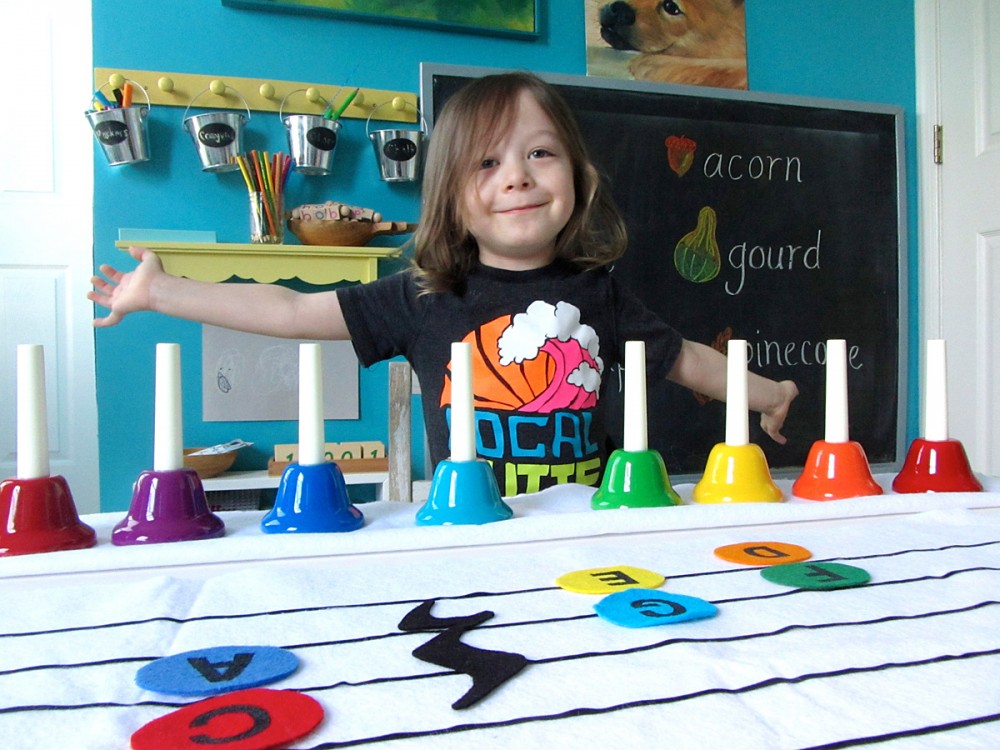 We are having so much fun with our music unit! Have you done any music homeschool lessons with your preschooler? I’m excited to see where Jax goes with music as he grows older. 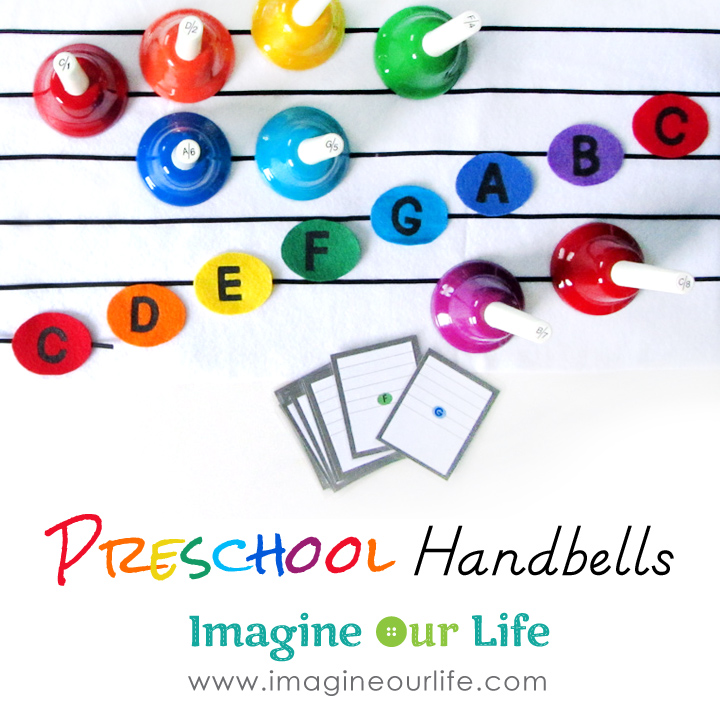