I plan to start doing follow-up posts on Fridays to let you know how past an ongoing projects are working out! If there is something in particular you’d like to hear more about, just leave a comment.

DIY Chalkboard Update: Jax seriously LOVES his chalkboard! So far I am only letting him have the chalk when I am in the playroom with him, since he’d likely hide it in strange places or color on his toys. Or, you know, eat it. (He’s actually really good about not putting things in his mouth, but he gets distracted sometimes and forgets.)

It’s holding up really well, though I’ve found it hard to get really clean, due to a slightly gritty texture. My board was smooth, so I have to assume it is the paint. The dusty look doesn’t really bother me, though. It looks very “classic chalkboard” to me. I plan to refresh the chalkboard surface eventually with the remaining spray paint.

Jax’s Apple Plant: So, when I was cutting open an apple for Jax about a month ago, I found that the seeds inside it had sprouted! We planted them in a pot and hoped for the best. Well, 4 or 5 of the sprouts have grown strong and the plant is now a few inches high! Grow, apple tree, grow! 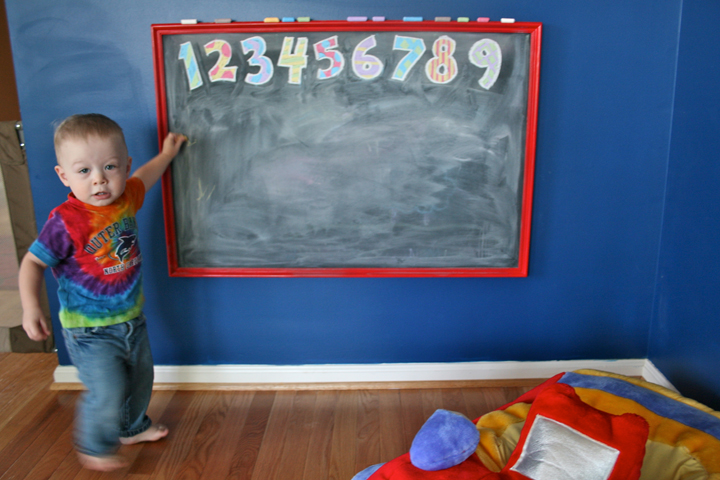 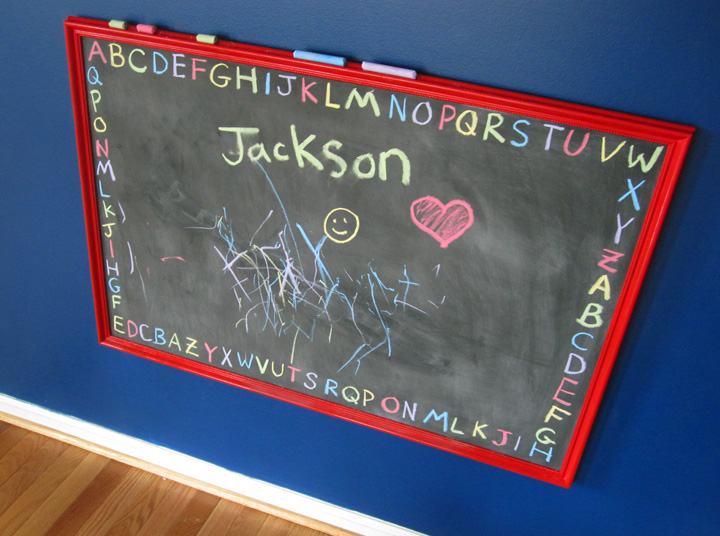 I’ve been wanting some sort of chalkboard in Jackson’s playroom for some time now. I just wasn’t sure what would work. The room was built to be a living room and has outlets everywhere. We have the baby proofed, but their placement blocked me from being able to just paint a chalkboard onto the walls.

When I discovered they make chalkboard spray paint, I knew just what I wanted to do. I measured out the wall where the chalkboard would be to find out how wide I’d need to make it so it could both be centered and cover the outlet. Three feet wide was just perfect.

Supplies:
In the clearance aisle of the craft store, I purchased a 2’x3′ frame that was 50% off. It was a tacky gold that wasn’t my style at all, so I also grabbed some spray paint. At the hardware store, I had them cut down a 2’x4′ piece of chipboard (I brought my frame and tested it after he cut 12″ off the board. Good thing I did – it was too short because the board hadn’t been 2’x4′ after all!) I also grabbed the chalkboard spray paint there. Here is the full list:

I started by sanding the frame so it was no longer shiny and sanding one side of the chipboard to rough it up. Then I set up a drop cloth outside and laid out both pieces. I did three light coats of spray paint on the frame, waiting 15 minutes or so in between. I did about 4 light coats on the board with the chalkboard paint. (Quick tip: I thought my paint was clogged, but it turned out my too-big gloves were blocking part of the spray and causing spatter!)

The hard part comes next: waiting! When everything was dry, I brought it inside to cure. Resist the urge to try the chalkboard for 24 hours. Easier said than done! 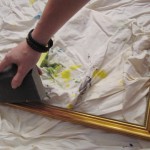 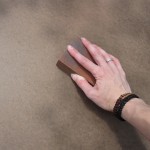 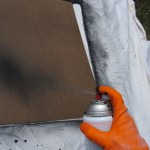 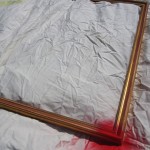 24 hours later, it was time to prime the chalkboard with a layer of chalk. I found that the spray paint left a layer of black sooty dust after it dried, so I covered the whole thing in chalk as directed, then used paper towels to get all the chalk and black dust up.

All that was left was to put the frame back together (minus the glass it came with) and hang it up! My frame came with one teeny tiny picture hook so I got a picture hanging kit rated for up to 50 lbs. It looks great under his art gallery! I chose a frame that had a perfect dip in the molding to hold our chalk. 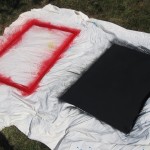 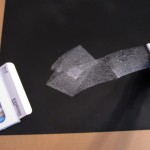 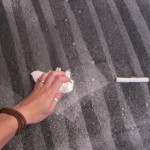 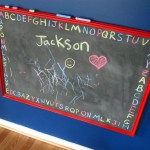 What do you think of our little project? It was so fast and easy, and Jax was super excited when I hung it up! 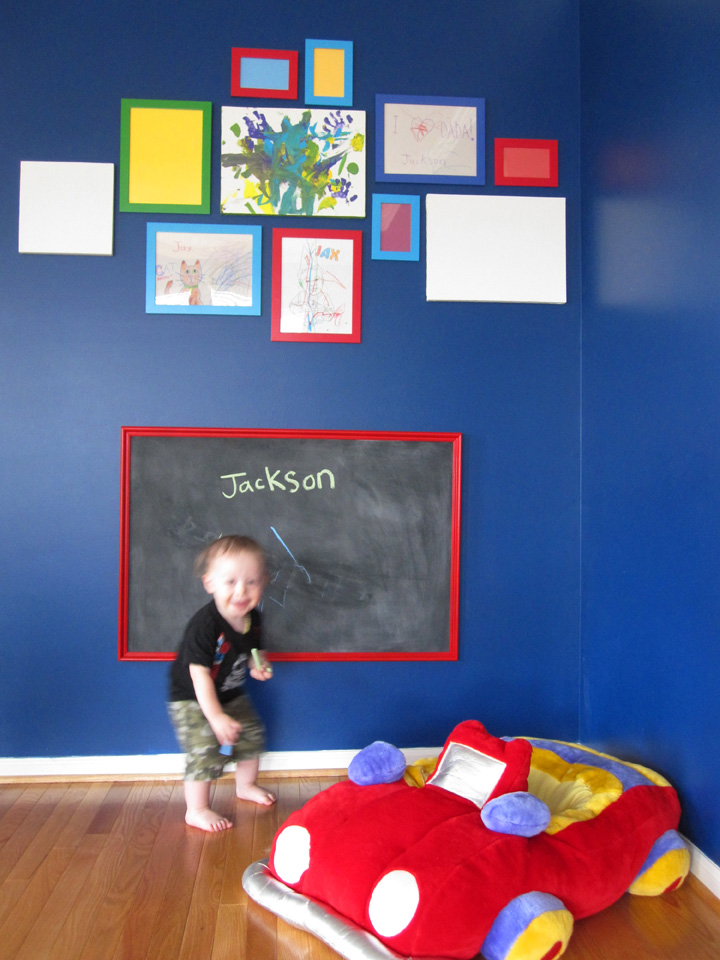 He was so excited, he couldn't stand still! 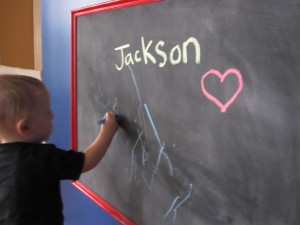 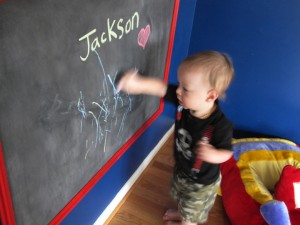 (Check out my Friday Follow-Up about this project!)